How Far Should Black Critics Go With President Obama? 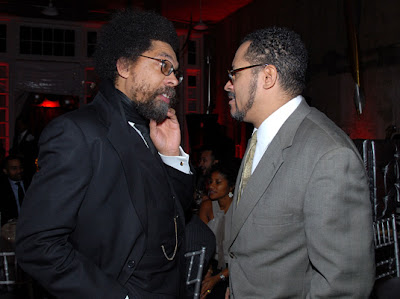 President Obama went on a European vacation, and all we got were some pictures. I guess I'll have to take a cue here from ESPN, the master of made up statistics - "Larry Bird is the most accurate inbound passer of all time" - and declare the Obamas "the tallest American presidential couple of all time." The buildup for this trip was so big it was hard to believe that the world leaders only met for a day. I imagine they wanted to make sure they got back home in time to see the world leader of golf try to snag another green jacket at the Masters in Augusta this weekend.

Then again, I guess it couldn't take too long for them to all announce "we're broke as hell too." I'll leave the parsing of promises that won't be kept to the pros at the Washington Post and The New York Times who get paid the big bucks to tell us, in euphemisms and anecdotes that we don’t understand half the time, why the majority of us don’t really understand the nuances of foreign diplomacy most of the time.

What I want to get into today is the debate that is brewing among the black critics of the Obama Administration.

I've been in online writing groups for years. The only reason they exist is to bring writers together to help each other get better by reading and criticizing each other's work. The first critique I got on my favorite writers workshop, Scrawl, stung quite a bit. I'd been writing in a vacuum on and off for a few years, and it showed. But I hung in there, and submitted another story, and then another. Meanwhile, I began critiquing the work of other writers. Doing the critiques, I learned early on that the way to get someone whose work I didn't think was very good to read my stuff was to address their literary deficiencies with some concrete actions, suggestions that were in some cases the same techniques I used to give life to my own work.

Many of us feel that in some ways President Barack Obama and his family are a cherished part of the African American collective, the same way the writers in my writing group felt that the work they submitted for review was an important representation of their artistic perspective. Which means that we who have dubbed ourselves cultural critics owe it to our new president to be as honest and as forthright as possible about his shortcomings as we are about his strengths. What we have to do is be wary of efforts by the mainstream media to delegitimize our commentary.

How much criticism is too much?

It's almost impossible to create a melody with just one note, let alone a whole song. When the critic begins to sound like a one note nancy, the way Tavis Smiley did last year, it's too much. But when the president is having a bad week, or a bad month, it is what it is. The best hitters in baseball strike out more than they hit the ball. The president is kind of in the same boat. Calling a strikeout after an unsuccessful at-bat is expected. But every solid base hit is not a fluke, or a lapse by the pitcher, or an unforced error. When President Obama gets some good wood on the ball, call it "good wood on the ball."

Can you criticize the president and still keep your Afro-American I.D. card?

This metaphorical membership card, not to be confused with the "race card", which is one of the funniest media-fostered oxymorons I've ever heard, does have a similar intent - to place restrictive boundaries around those upon whom these designations are conferred. If you are having a problem with the allegiance to President Obama versus your allegiance to your perceived peer group, you need to think about this - he may look like us all of the time, but he stands for us for only a small part of the time that he is the president. This metaphorical membership card business is more about how you think than who you are. You might not be able to leave home without American Express, but this 'black card" is one you can leave behind.


How critically are black people willing to examine the inaction the president has opted for on numerous occasions?

This is probably the most important area of all. When the president does not address certain issues that disproportionately affect African Americans, it may be for a variety of reasons - lack of political capital, lack of emphasis by his staffers who put together his briefing books, or simply that there are other issues that are crowding the president's bandwidth. It really doesn't matter what the reason is, though, because our responsibility to ourselves should trump any urge to submerge our needs in order to make him look good. For instance, there are many homes in poor and working class black neighborhoods that have been flipped over and over again until they were sucked dry of their equity by unscrupulous investors who took advantage of the relaxed lending standards, or in some cases, committed outright mortgage fraud.

These empty houses, which are a significant part of the "toxic assets" the banks are complaining about, aren't moving, even with new investors out there who are willing to bring as much as half of the purchase price to the table, because the lenders are not willing to write down the debts on these houses to levels that can support current appraisal values. This is an issue which needs to be addressed right now - the people left in these neighborhoods are now being held hostage by redlining because the lenders who are willing to write new loans for buyers won't do business in zip codes with a high number of foreclosed properties. And if the president isn't willing to use his bully pulpit to do something about it, we need to aggravate him and his staff until he does.

Cliches are cliches because they are overused metaphors, but we use continue to use them because they are one of the most efficient distillations of the essence of a literal truth. So I will leave you with my final reason why we need to criticize the president - "the squeaky wheel gets the grease", no matter what color they are.