My Six Pence On The Economy 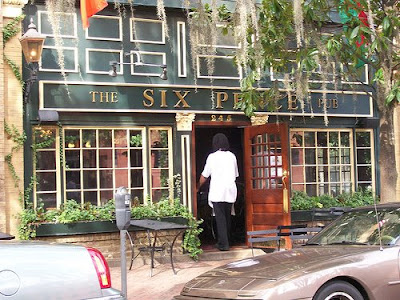 There is literally only one conversation going on these days - the economy.

I was in a restaurant yesterday with S. in Savannah, Georgia when she leaned over and said "all these people are talking about the economy. Can't they talk about something else?" We were in The Six Pence Pub on Bull Street, a cozy little English pub, complete with a red telephone booth outside, near the western edge of Savannah's historic district. It was the kind of place that attracts tourists and locals alike who are interested in something other than the chain restaurant fare.

The early afternoon crowd tended to be more grey haired than not. As I listened closer, I realized S. was right - at every table around us people were talking about how they were going to pay for college for their children, or how long it was going to take to sell their home in New Jersey so they could move to Savannah, or how long it was taking them to sell the houses they were building.

The tone was one of resignation, of a certain level of acceptance that things were going to be bad for some time.

The most striking thing was the lack of political rancor – no one was lambasting the president, or railing against the Democrats, or castigating the Republicans. Their conversations were at a more fundamental level than that, with occasional asides to announce the closing of a friend’s business, or the layoff of a relative.

At this level, political posturing is meaningless. Real people are losing real jobs, real property, and real businesses. Parents are concerned about their children's welfare, whether they are minor children they are trying to educate or adult children who have families of their own.

By the time we left the restaurant, I was convinced that I was seeing the beginnings of a nation that is almost ready to do one of the things we do best - come together temporarily in a crisis to achieve a common goal.