Dancing With The One Who Brung You 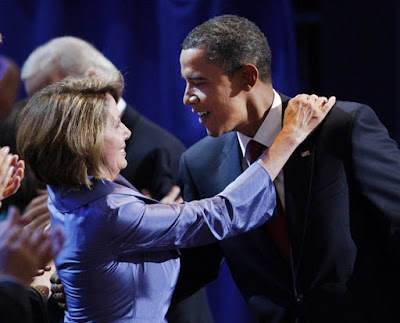 After listening to the TV pundits and reading the opinion columns the last few days, all of them railing about the failings and deficiencies of President Obama with hyperbolic vigor, a vision came to me.

I imagined that instead of Obama, we had President John McCain standing behind the White House press room podium, intoning, in the manner of Ronald Reagan that "the fundamentals of the economy were sound."

I pictured Vice President Sarah Palin on Meet The Press, stumbling over an incoherent explanation of exactly how a proposed trillion dollar tax cut package actually creates those jobs we need to boost our ailing economy.

They would be facing the same problem President Obama has - a Congress dominated by leaders on both sides of the aisle who have come to worship the rigid, severely restricted boundaries of their respective ideologies. Tax cuts, which seem to be the only tune Republicans can all whistle together, don't mean a god damned thing to you if you have no job. Funding projects slated to start three years from now, which appears to be a constant theme running through the Democrats list of proposals, mean even less.

Which means your president can be as bold and as visionary as Jesus - and get the same kind of bloody reception.

Or he can try to figure out how to get a passable economic recovery package in front of the members of Congress, which means appealing to their political needs and desires. Coming back to the nation empty handed with his Boy Scout values intact is not an option for President Obama.

He has to "dance with the ones who brung him", even if they are a little embarrassing.

Both political parties are fooling themselves with the labels "liberal" and "conservative" – almost all of their members are centrists, men and women who don't have the guts to back anything but the party Kool-Aid if their lives depended on it. I don't know why they even waste time swearing themselves in, because the things they pledge to honor and uphold in that ceremony simply do not occur.

The president needs to get his hands on a pile of cash, metaphorically speaking, that can be allocated in ways we haven't tried before, even though the last two piles we've spent on the banking industry, another a method we haven't tried before, hasn't shown any immediate relief. The president needs the ability to intimately influence the distribution of these dollars, and he needs it now.

And the pile needs to be a lot bigger than the one Congress has come up with, not to solve our problems, but to even have a chance at stemming them. Two trillion dollars is the bare minimum, and even that may not be enough. I'd add another five hundred million just to mess with the deficit hawks, who have been swooning like Scarlet O'Hara over the thought of borrowing one more dollar when we already owe so much.

But there is no one in any country in the world except the United States that really believes we have the capacity or the will to pay our deficit off – and frankly, they don't care, because they like getting the interest.

It is almost painful to watch men who appear to have common sense look so pained when they talk about the enormity of the deficit, as if it is some kind of moral failing, inconsistent with our nation's values, when it is in fact an exact reflection of who we are and what we believe, because if we don't believe in anything else in America, we believe in "buy now, pay later."

"Buy now, pay later" is why the banking crisis hurts so much.

So man up, representatives of the people, and represent something besides some god damn slogans for a change. Hand your president the biggest pile of cash you can gather, and tell him he has our lives in his hands. Find every program and agency available that can begin deploying any infusion of cash they get in 90 to 180 days - not just the "shovel ready" ones, but the "classroom ready" ones too, to start retraining all of us whose jobs are never coming back.

Try to expand your horizons beyond the narrow confines of the yesteryear platforms your respective political parties cling to far enough to be able to actually see the people you say you represent. Because the bills they get in the mail don’t come in red or blue envelopes. The groceries they buy don't end up in red or blue bellies.

You might not want to dance with one you brung, but the jobs you save this time, Congressmen and Congresswomen, may be your own.