Book Review: Brotherman - The Odyessy Of Black Men In America 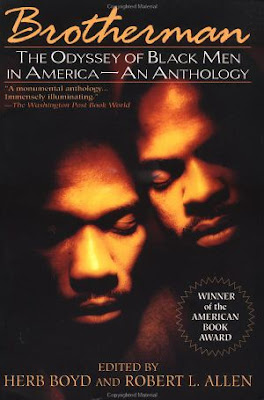 One of the questions I almost never hear from black men is “what are you reading these days?”

What I do hear is "you know, I was reading Power Moves For Power Guys last week while I was headed to Vegas for the IT tradeshow where me and my partner showcased our new company" from my buddy who is trying get a start up off the ground.

Or "that Joe Kennedy was a son of a bitch. I just got this book about how his crooked ass transformed Wall Street" from my buddy who is obsessed with the Kennedy patriarch's ruthlessness.

For my buddies, mentioning a book they've read recently mostly serves as an opportunity to tell me what they are focused on doing, or as an adjunct to a broader narrative that signals a new direction they've decided to take in their life.

So I was pleasantly surprised, at a party back during the Christmas season, to hear an African American man who was not a college professor ask me "what are you reading these days?" It turned out that in addition to the books he read to stay abreast of trends in his industry, he also took the time to read literature and essays written by black men.

We ended up having a great time that night, with a sprawling conversation that ended up including practically all the party's late night stragglers as we talked about the writings of W.E.B. DuBois, and Richard Wright, and E. Franklin Frazier, and even Carter G. Woodson, who was the catalyst for the idea of Black History Month.

So when I came across Brotherman: The Odyssey Of Black Men In America - An Anthology, I was impressed, when I flipped it open, by its voluminous table of contents.

There are one hundred and fifty excerpts from essays, novels, and speeches written by African American men, divided thematically into six sections, that span practically the whole of our existence here in America. The large span of time that these authors represent has a leavening effect right off the bat, largely allowing it to escape the ideological boundaries that often limit the appeal of a compilation.

Other anthologies centered around the literary output of black men tend to veer towards a particular group – writers or politicians or celebrities – or a particular time period – the sixties or slavery - and are often dominated by the same well known names we see in the media over and over.

Forty of the names in this book I’ve never seen before. Of the others whose names I instantly recognized, there were many who I'd never seen in print.

In some ways, reading a short selection from a varied list of authors is an experience akin to standing in your local Barnes & Noble bookstore, flipping through a few pages of a few books that catch your eye to see if they are worth buying – except there is no retail chain bookstore in the country that have more than a handful of these authors on their shelves.

I’d never seen anything written by Duke Ellington himself before – reading his account of his musical credo, I could practically feel his total immersion in the world of music. Ellington's reliance on the insider lingo of a professional jazzman and the cadence of his sentence structure did more the his actual descriptions to give me a behind the scenes look at the life of a traveling musician in the golden age of the jazz band.

I finally got a glimpse at a story from Elbow Room, a short story collection by James Alan McPherson I’d never gotten around to ordering online, who is one of the world’s greatest living short story writers.

And I was immediately captivated by Sidney Poitier as he rounded out the details behind the beginnings of his career, which I had always associated with the famous anecdote about the way he had learned to speak English well enough to act – by listening to the radio.

In reaching beyond the traditional academics, politicians and celebrities whose lives and opinions we are used to memorializing, to include the work of many men who have remained at the margins of history, or have not received wide spread acclaim, editors Herb Boyd and Robert Allen have taken a big step towards broadening the narrative imagery associated with the African American male, incorporating voices from across the spectrum of black life in America.

More than a mere anthology, this book is a gateway. This ambitious assemblage of excerpts from essays, stories, documents, poems, narratives, position papers, novels and autobiographies has no equal in size, scope, or mission. "The central purpose of this introduction," stated plainly in the book's introduction, "is to create a living mosaic of essays and stories in which Black men can view themselves, and be viewed without distortion."

It has already caused me to add several books to my list of "must have's". And it has added new dimensions to many of the stories I already know about the men whose life histories have been drilled into me since my youth.

For black men on the go, like some of my buddies, who have confined their reading since school to trade journals and self help books, it is an eclectic collection of excerpts that has the ability to expand their perspective of the world. For black men who have become allergic to reading anything outside of the sports pages, like some of my other buddies, it is an excellent way to get back into the swing of reading again.

And if you are one of the millions of non-black Americans who have depended up until now on television news or rap music to inform you about what black men are thinking, I couldn't think of a better way to begin to educate yourself on the vast array of perspectives and experiences of your darker brothers.