Have Metro Cards, Will Travel 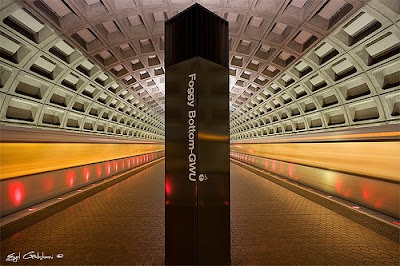 I talked to a couple of friends who are going to D.C. this weekend for the inauguration. My girl from Chicago is getting chemically activated footwarmers. My man from Alabama is getting long underwear. They are both stocking up on batteries. They are both putting away single serving snack paks. And they have both already received by mail the D.C. Metro cards they ordered in advance over the internet.

I could feel their Obama mojo starting to kick in as we talked, a mixture of exuberance and uncertainty - these are the kind of people who plan so much in advance that they are rarely surprised by the unexpected. But the number of visitors coming to D.C. for the inauguration of Barack Obama this weekend means that there is really no way for my friends to do anything more than plan to be warm and play the rest by ear.

My man from Alabama, who is an old co-worker of mine, has volunteered to give Brown Man Thinking Hard an account of his visit when he gets back next week. He and his wife were tireless Obama volunteers here in Atlanta last year, registering hundreds of voters and knocking on hundreds of doors week after week to increase voter turnout. They are two of the hundreds of thousands of campaign volunteers expected to throng the Mall on Tuesday to witness the swearing-in of Barack Obama that their tremendous efforts made possible.

I'm looking forward to talking to him when he gets back. He is the kind of guy whose stories are packed to the gills with details, so I'm sure you will enjoy his version of the inauguration. In the meantime, several articles in the nation's leading newspapers do a pretty good job of laying out the 411 on things to do and places to go if you are on your way to Washington. "The Inaugural Pregame Show", "Where to Go in D.C.", "Black History, Alive in Washington", and "A Neighborhood to Explore" are all excellent sources of information.

And if I could remember the name of the neighborhood eatery I went to years ago near Howard University, where I had an experience between two buns called the "Mo Betta Man" burger, I would recommend it heartily - one of those burgers could take the place of two meals.

After seeing the sobering site of that plane in the Hudson River yesterday, I've got to add this - I hope that everyone traveling from across the country to the nation's capital has a safe and comfortable journey.