Right Off The Bat 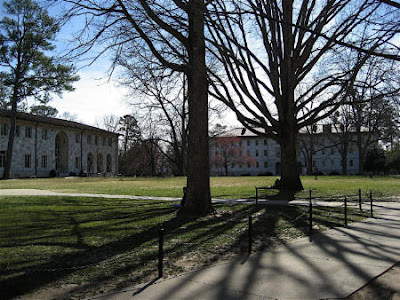 My Yahoo email account blew up today as I received several blast emails from some of my college classmates, who are looking forward to going back to the quad for our twenty year class reunion next month.

One of them was from a woman who had become an instant friend practically the moment I hit campus back in 1984.

I hadn't heard from her in years. A self proclaimed product of the streets of Cincinnati, she was a veritable whirlwind of energy - dramatic, direct, and ready to have a good time at the drop of a hat. From day one, Miss Cincinnati and her roommate helped lessen the sudden impact of the realization that I was a minority student at a major university, a feeling of anxiety that had overwhelmed me that Sunday afternoon after my parents had waved goodbye.

What Miss Cincinnati lacked in scholarship, she made up for with an overabundance of style. She was petite but feisty, with an innate ability to instantly rattle off a comeback if somebody started talking trash to her. Although there were some who did not get along with her right off the bat, she could still find a way to connect with them, in spite of their reluctance to want to get to know her.

You didn't think of Miss Cincinnati and her roommate, a Long Island native, in the plural sense - their names seemed to be permanently conjoined into one long polysyllabic word, as if they were Siamese Twins. You couldn't utter one of their names without adding the other one.

I hope the person Barack Obama chooses to be his running mate is capable of giving the Democratic ticket this kind of synergy. Because at some point in the next couple of weeks, the name Obama will be first half of a permanently conjoined phrase that will ring from the lips of cable news anchors and talk radio hosts around the country. I hope Obama and his running mate get along right off the bat, the same way Miss Cincinnati and her roommate did. Maybe this will help ease the nation's unspoken anxieties about having a minority as the head of our country.

A running mate with more dramatic flair, someone who is more emotionally engaging - a person with these traits would be an excellent complement to Obama's studied cool and detached manner. And if they have even half of Miss Cincinnati's killer instinct to go for the jugular whenever she felt threatened, they will be well equipped to help Obama wade through the heavy onslaught of smears and attacks that will be directed towards him this fall.