I Won't Be Getting A Text Message From Barack Obama 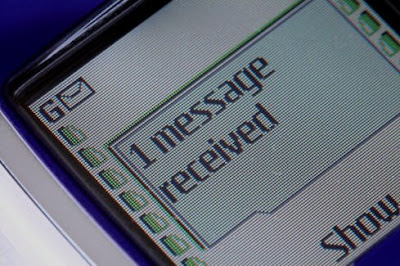 I called a friend of mine from college, who is now an anesthesiologist, when my father was scheduled for surgery here in Atlanta last year, to see if she knew anybody on staff at the hospital where his doctor was going to operate. She told me she'd gone to school with a couple of people who practiced there. "Just text me the date of his surgery and the name of his doctor."

I had to confess - I had never sent a text message before. I wasn't sure if my phone was even set up to send and receive them.

"You've never sent a text? You? Mr. 'Always Knows Everything About Everything'?" She laughed out loud, a laugh I heard clearly because...well, because she had one of those damn headset things on, transmitting each chuckle with digital fidelity.

Ordinarily, I would have said "to hell with it", but my father was involved - for a man who had never undergone major surgery before, I thought it might help him relax if he knew the person putting him under saw him as more than a set of vital signs wearing a wristband.

So I told her I'd figure it out. The guy at the phone company explained that I was already paying for the service, but it wasn't activated. A few clicks of a mouse later, he had turned my phone into a text machine.

Sending that first text message must have taken me twenty minutes. The period, I discovered, could only be accessed by pulling up a chart and pushing the phone's main navigation button. The whole rhythm of selecting letters of the alphabet reminded me of Morse Code, another method of communication that I'd failed to learn back in Cub Scouts. But I did it - I sent a coherent message later that very same afternoon.

Which is when I discovered the other downfall of text messaging. You had to wait for the person on the other end to respond to your message. My blood pressure probably jumped twenty points when the realization hit me that this was just like email, only a lot more aggravating, with a smaller viewing screen.

I didn't understand the text message shorthand she used to reply. So I had to call her the first time to ask her what the message said. I think this shorthand is a large part of text messaging's appeal, especially for those who always hated composition, or were terrible spellers, or couldn't fashion complete sentences.

So I won't be getting a text message from the Obama Campaign this week. That's fine by me - I like the fact that my cellphone rarely rings. But since I'm sure there will only be a few moments that elapse between the time they send out the news and the time it hits the internet, its okay. I'll still feel like I'm in the loop.

Despite what all the pundits on TV will be telling you, there will be no risk to the campaign because they've chosen this unorthodox method to tell the world who Obama's vice president pick will be. I don't feel left out, or slighted, because my fingers are too big and too stiff to easily work the keyboard on my phone. I'm actually glad that they are working so hard to keep younger voters energized.

The thing I am marveling at, though, is the way that the Obama Campaign is wresting even more power away from the traditional news media with this announcement. A lot of information, a whole lot, is being disseminated straight from the campaign into the email boxes of millions of people, with the only spin on it being the kind that makes Barack Obama look good.

I would be very tempted, if I had any idea what time this announcement might actually happen, to hit a popular coffee shop, or a large bookstore, or a plaza on one of Atlanta's college campuses, just to see what kind of reaction America's most connected generation has when they get the news.

Hard to believe that politics is getting to be hip.