What "The Bradley Effect" Really Looks Like In West Virginia

[Sometimes I run across original research, original analysis, or hard-to-get information that is exactly the kind of stuff I live for - well thought out, well written, well researched commentary, the kind that your media experts get by the pound but think is too much for you to understand.

This author doesn't really need to keep his avocation under the radar for professional reasons, but tells me that everybody knows him as Carnacki. His website is called West Virgina Blue. The post below has been slightly edited for Brown Man Thinking Hard, but it can be found in its entirety at his website. Carnacki has given me permission to publish his comments and photos here.]

All I've been hearing about, and will probably continue to hear about until after the election, is the famous Bradley Effect, where political pollsters predicted former Los Angeles Mayor Tom Bradley had won the race for governor of California back in 1982 based on their research and exit poll data.

Many of the pollsters concluded that Bradley's polling data was skewed by his race, hypothesizing that voter reluctance to appear to be racially biased prevented a significant sample from answering poll questions honestly once they had cast their ballots.

This idea has been kicked around by political pundits all year, leading many of them to reserve a healthy amount of skepticism about the accuracy of the primary and presidential election polls since Barack Obama, an African American, was running for president.

The bad thing about TV and cable news shows is a pronounced tendency to use the same image over and over, day in and day out, in order to anchor the stories they are developing in their viewers minds. With the limited amount of airtime they have, that means there are a WHOLE LOT of things you don't get to see that are going on in the rest of the country.

What you are about to see are the faces behind the statistics that are showing Barack Obama only six points behind John McCain in the state of West Virginia, a state that has not gone for the Democratic presidential candidate since Lyndon Johnson in 1964.

Tour for Change in West Virginia by Carnacki

You don't think Appalachian Americans are ready to vote for a black candidate? I beg to differ.

The following diary is photo intensive. The West Virginia Democrats and union leaders took two buses and several vans from Charleston, West Virginia throughout southern West Virginia on a Tour for Change. I drove 6 hours from the Eastern Panhandle on Friday night to join them at 8 a.m. Saturday.

Ben Smith from Politico hopped on the bus to cover the tour. He spoke to a lot of people, including Tom Vogel at length who explained the national pundits took the primary results here to be anti-Barack Obama when it really was pro-Hillary Clinton. Since then the state has run a coordinated Campaign for Change to encourage people to vote a straight Democratic ticket, from Barack Obama on down.

It was a crisp autumn day. Mark, one of our Democrats from Danville, said he played football on the field when they were blasting through the rock not far away to build a cut through the hill for the road. It shook the field as they practiced. This was long ago, but out of kindness to him I won't say how long. 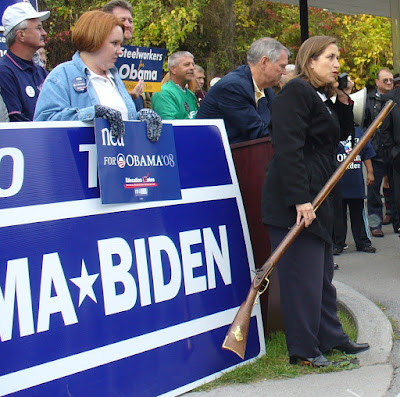 At each stop Kenny Perdue handled the introductions and the opening and passed it off to Glen Gainer, who really fired it up for Obama. In West Virginia, even the state auditor and the state treasurer do stemwinder speeches. (Joe Manchin headed from Charleston to Bridge Day to speak to the tens of thousands there.), passing the microphone through the ranks.

Natalie Tennant, the first and so far only woman selected to be the West Virginia University Mountaineer mascot, fired her musket at the close of her speeches when we were outdoors. Talk about "Fired Up" and "Ready To Go". You'd think the musket shot would have been rousing, but it was Cecil Roberts brought really brought it home.

He talked about how awful the policies of George Bush have been on working people and how Dick Cheney mocked West Virginians as inbreds at a black tie dinner for his millionaire and billionaire friends. Cheney has even joked that now he doesn't need the votes of West Virginians for re-election. "That's what Republicans think of you," Roberts said. West Virginians can't punish Dick Cheney, but they can punish John McCain and the other Republicans. 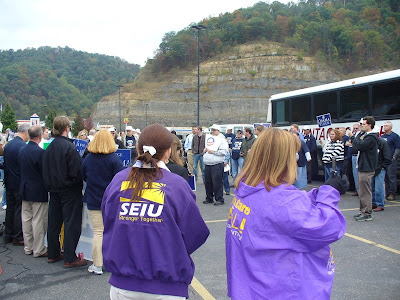 The Logan Mall - a shopping center - is the flattest area of the community because it's a reclaimed stripmine where they've built retail and restaurants. 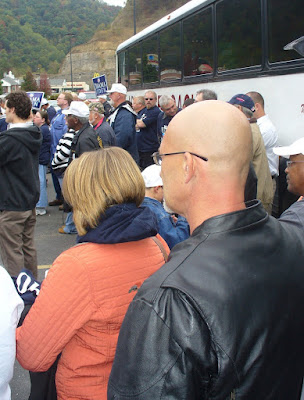 Logan surprised our volunteers. The longer the people spoke, the more people showed up. And several of our volunteers passed out Obama Biden bumperstickers on the main thoroughfare to cars that would stop and roll down their windows. So then they began passing them lawn signs too. It seemed like more cars took them than didn't.

There were more than 100 people in the fire hall before we arrived. Ryan was there during the primary and these were strong Hillary Clinton supporters. They're coming home.

You heard of "Yellow Dog Democrats" - I called these "Broken Glass Democrats." They'd crawl across broken glass to vote for the Democrat. This county is very important because they generally vote a straight Democratic ticket. 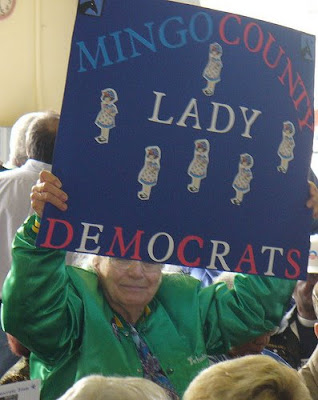 As Nick Casey and I talked about later on the bus, the McCain campaign (and unfortunately some of our own people here) assumed these folks wouldn't vote for a black candidate. Many of us believe they will. We have faith they're better than that and they don't deserve being taken for granted by anyone, Democrat or Republican. These are good people. These are good Democrats. 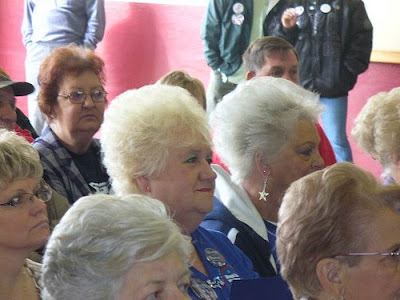 We pulled into Welch and the people were fired up and ready to go before we even got there. Three young teenagers were banging on drums and had a good beat going. McDowell County is about 25 percent African American in a state that has an overall African American population of about 3.5 percent. 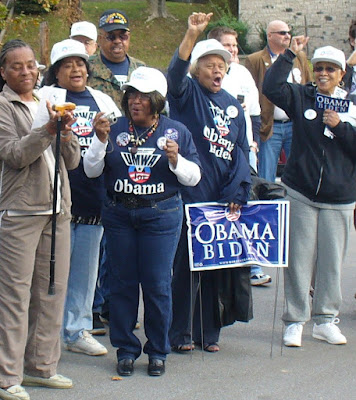 Throughout the trip big, burly men would come up and hug Cecil Roberts. They love him here. Unions for steelworkers, painters, and miners, teachers, government workers, service industry, were all represented. Cecil Roberts has to be one of the most popular figures in the labor movement today. 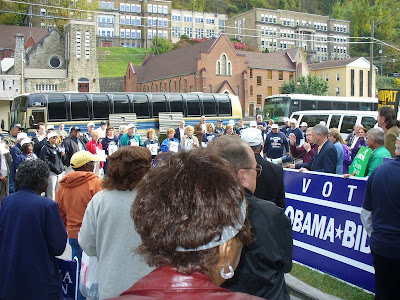 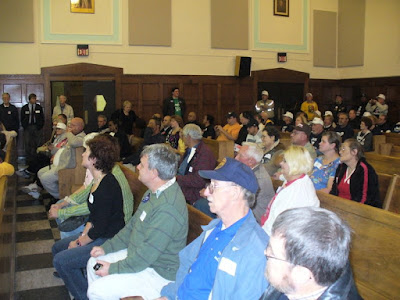 People with preconceived notions about West Virginia have made a lot of presumptions, basing their opinions on the most negative Appalachian stereotypes and the way people here look. As Tom Vogel explained to Ben Smith, you can find people in any part of this nation making ignorant comments. I think the videos from northeast Ohio and elsewhere from the Sarah Palin rallies have demonstrated that quite clearly.

John McCain has taken my state for granted. He has one field director here. After stating they were sending Sarah Palin here, Palin went on a "Blow Off West Virginia Tour", hightailing it to Ohio and Pennsylvania.

Joe Biden is coming here and soon Barack Obama will too. They want to win our state.

And so do these people.