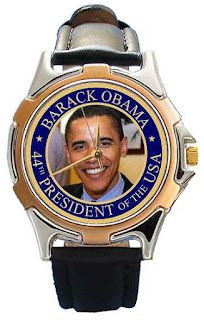 In a major shakeup at the Democratic National Committee -- and a departure from tradition -- large parts of the committee's operations are relocating to Chicago to be fully integrated with the Obama campaign.

“Obama Time” is now in effect.

In one fell swoop, Barack Obama has neutralized any chance of a widespread disconnect between his campaign and the party, cut down on the possibility of leaked information, reduced his campaign costs, and leveraged the efforts the DNC has already made towards a 50 State Strategy.

Looks like this story just hit the streets about six o'clock tonight – not a lot of ink on it yet, even here on the ‘net - mostly recaps of the information provided by Ben Smith of Politico. By tomorrow, the talking heads will be back to reading their tea leaves, giving us the body counts - who's been fired, hired, or reshuffled - trying to spin what actually happened even though we can see it for ourselves.

I’m reading Team of Rivals: The Political Genius of Abraham Lincoln and there are many parallels between Lincoln and Obama. Lincoln maximized the strengths of his allies and minimized the efforts of his foes to thwart him without being confrontational, something that has long been missing from our national political scene. A lot of the skills Honest Abe used to marshal the talented men who served in his administration had been honed back when he was a young lawyer out “riding the circuit” across rural Illinois. It looks like Obama is letting more of his grassroots organizing roots show with this latest move to centralize his party’s energies for the fall campaign.