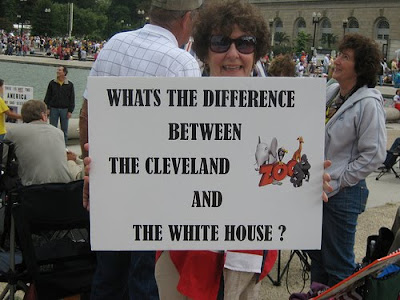 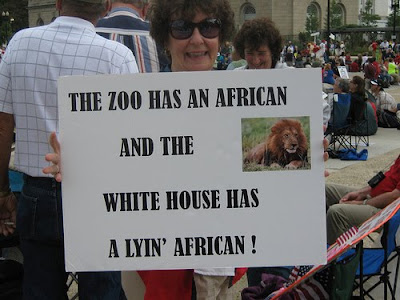 These white Americans you are seeing on your TV every night hollering and yelling and screaming about our president's Kenyan roots need to be put on the hot seat, to get backed into a corner, to be force fed until they choke on the ugly truth that underlies the relationship between blacks and whites in this country.

It is their special brand of unrestrained, self righteous indignation, as if all the right thinking people are lined up behind their sneering eyes whenever they utter a derogatory racial pronouncement about our African American president that make me want to throw something at my damn TV.

Yesterday, as I watched the news, this circus reminded me of something I wrote a few years ago, something that sadly, is still true:

"White folks, and white men in particular, have always found ways to alter, bend, or just totally ignore the rules they've made up when something doesn't suit them."

The Black Folks Guide To Survival

S. and I shook our heads and rolled our eyes all through the news last night as the newscaster talked innocuously about the nature of the recent protests across the country while pictures of angry white people filled the screen behind him. It was as if the news announcer was playing charades, avoiding any mention of the one word his viewers were looking for to describe those protestors.

We both stared wide-eyed at the TV as Jimmy Carter came on to thoughtfully but reluctantly say what we have known since the beginning of this mess - that there are a lot of white people in this country who aren't willing to accept a black man as their president. Why were we so wide eyed? Because the old joke in the black community was that nothing existed unless white folks said it did. No alternate points of view were relevant unless white people said they were.

All I know is, I am not taking the weight for the racial problems America has brought on itself.

The "go along to get along" days are over.

Living in America will be more complicated as a result.

And in the end, there may not ever be an answer to racism.

To the people who are gearing up for this weekend's hate rally, whatever part of the country you are in, I've got a news flash for you - the otherness of black people is bound only by your limitations.

Think about it for a second.

My own level of perception is at once panoramic and precise, the connections between my ocular and my cerebral functions requiring exactly the same amount of electrical activity as yours, the osmotic properties between my dendrites and my synapses identical to those that course along your nerves.

America was going to have the same warts whoever got elected.

You know all this.

If you don't, you have no business holding up placards denouncing things you don't understand.

It would make much more sense for you to be in Connecticut right now, demanding some of the trillions back that you have loaned your Wall Street bankers, the same bankers who are even now repacking the exact same securities that caused this financial collapse in the first place, with a shiny new name and one of those gold stars from the ratings agencies that are about as valuable as the ones a kindergarten teacher gives out, for resale to the people who run your 401(k).

But that black bogeyman is still one of the most powerful agitators in the business of politics.

I'm still waiting for someone, somewhere, to bring O.J. into this.