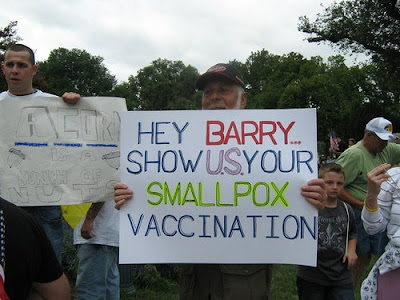 If you call me by my real name, the legal middle name that I was given at birth, I won't hear you at first, because it is used so infrequently.

I chose instead to use a shortened version of my middle name.

If you keep at it, though, with the version I've mothballed, I'll respond, although inwardly I will feel that you have changed the nature of our relationship in a way in which I really don't want you to get too comfortable with.

But there gets to be a point, after I've heard you say it a half a dozen times, when I am liable to get ticked off, even though it says right there on my birth certificate and my bank statement and any other legal or business document I posses that this is my actual name.

I imagine President Obama, who went by "Barry" for many years before reverting to his given name of "Barack", wrestled with the need to fit into a society chock full of Bills, Toms and Johnnys the same way I did with my given name "Krishna".

I brought this up because I can look at my hit counter and show you by the spikes in my visitor report just about every time I have used the word "white people" in a title. Those have turned out to be some of the heaviest traffic days I've gotten in the last year.

I can write "fringe", "subset", "few", or any one of those other words that mean "some" or "minority of" all day long, but it doesn't matter - to the many vocal critics on this blog and others who are turned off by this latest turn in our nationwide dialogue on race, any mention of the word "white people", it seems, is an indictment of all white people.

The one thing I have noticed in all my reading - and I have read many, many millions of words over the years - is how little the phrase "white people" is actually used in our newspapers or on our news reports. On the other hand, minority groups are identified by name so often, that to hear someone say "black people" or "asian people" or "Hispanics" sounds normal.

Kind of like hearing the shortened version of my name sounds normal to me.

Writing the phrase "white people" seems to really bother these people who rush to fill the comment sections of this blog and others like it, who are bringing a different perspective to political discussions, with their indignation at being singled out formally, as if every usage of this phrase pricks away at what I can only assume is the neutrality that these sensitive folks feel they enjoy in America.

Talking about race in America is uncomfortable. It calls into question a person's own sense of morality. It forces people to examine closely all those inequities we have learned to rationalize instead of challenge.

Watching our punditocracy in action this week, both in print and on TV, twist Jimmy Carter's carefully chosen words into a blanket pronouncement fitting the narrow minded narratives of yesteryear that seem to run continuously in their heads, I have come to the realization that I am tired of the same old same old AARP crowd holding the political conversation in this country hostage.

And I am not amused by the rest of the entertainers posing as political prognosticators who populate our airwaves with commentary that begins at the ridiculous and goes downhill from there.

One of the real challenges we face in America when we talk about race isn't just the empirical evidence and the undisputed facts - it is the degree to which we are willing to accept other viewpoints as legitimate.

George Stephanopolous asked President Obama the obligatory question on race and the statement made by Jimmy Carter better than I would imagine any of the other interviewers in the president's TV news show marathon did today, posing it not as a either/or, "is the claim legitimate or not" fill in the blank query, but in more realistic terms that asked instead to what degree is the claim relevant.

Stephanopolous asked, "Does it frustrate you when your own supporters see racism that you don't think exists?"

President Obama answered, "Look, I think that race is such a volatile issue in this society - always has been - that it becomes hard for people to separate out...race being sort of a part of the backdrop of American society versus race being a predominant factor in any given debate."

"A part of the backdrop of American society."

Like the names the president and I were given at birth, whether we want to acknowledge them or not, race is as important to the American story as the percussion section is to a symphony orchestra. Excluding any acknowledgment of the way race has helped to fuel the fire of discontent about the healthcare debate or concern over the notion that this particular president's administration is aiming to "take over everything" means we are not willing to fully explore the sources of the animus and vitriol that lie at the root of recent group protests and individual protestations.

I will repeat the end of the last sentence - subset of white America's recent group protests and individual protestations - for those of you who eyes usually miss this explicitly stated demarcation.


The irony in all this is, the only time I am happy to hear my full name called is when the issue of healthcare is involved - specifically, when I visit the doctor's office - because when I hear the nurse with the clipboard read my name, it means it's time to head back to the examining room and see the doctor.