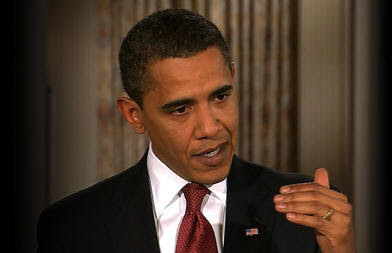 I called my buddy immediately after President Obama exited his press conference, before the commentators could begin to start telling us what we just saw.

"You're in good company. S. was asleep before the president finished answering the first question. Dude, the damn dog was yawning at the TV."

My buddy paused, letting a small yawn of his own pass. "He's going to have the reporters scared to ask questions with answers like that."

I've never really been a fan of these kinds of things, because they usually are more about style than substance. Multi-dimensional thinking is what I want in my president. Someone who has the capacity to use the entire capacity of their brain power when things go wrong – not just the left side, or the just right side, or the just damn middle, but the whole entire thing.

President Obama transformed into Professor Obama before our eyes, segueing from reading his remarks from the teleprompter to answering questions from the press. Professor Obama proceeded to take over the question and answer session with a fifty minute performance. At times, it seemed like he was teaching freshman seminar classes in economics and political science.

It was very impressive at first, but by the end of the evening the president's wide ranging answers had become a bit pedantic, with the length of his comments threatening to try the patience of even the most dedicated political junkies.

"You probably felt like you were back in law school watching this," I said to my buddy as we joked about the president's "around the world in eighty days" method of not exactly answering the questions he was posed.

My buddy groaned audibly, as if I had dredged up a painful memory. "Yeah - he's a professor alright."

"Man," I said, "Obama was excited to be there. There was fire and enthusiasm in his monologue. It was like the trip to Elkhart was his warm up, like the day trips used to be back on the campaign for his big night time rallies that were more likely to be on prime time TV for free."

President Obama put the "bully" in "bully pulpit last night, using his celebrity and his breadth of knowledge to shape practically all of his answers to press corp questions into vehicles for his main themes - creating new jobs, easing the credit crisis, stabilizing home values, and getting some kind of expansion in our economy to counteract the current contractions.

If you didn't know these were his main themes, you were probably asleep too.

I was actually surprised when he didn't somehow turn the question about Alex Rodriguez's admission of steroid use into yet another illustration of how his economic recovery plan was going to help the citizens of Elkhart, Indiana, and by extension, the rest of America.

The other thing about the sheer amount of verbiage contained in President Obama's responses is the indirect effect it will have on reshaping the media narrative. In addressing all of the things he touched on for the next few days, the news media will have to jettison some of the "strife between the parties" storylines, effectively removing the Republican message from the forefront of the public's minds at a time that is crucial to the passage of theeconomic recovery bill.

S. woke up after the ninth or tenth question. She got a little perturbed towards the end, when I mentioned that the press conference, the one we'd both figured would be over in half an hour, was coming up on the sixty minute mark.

"What? This thing is about to mess up my shows."