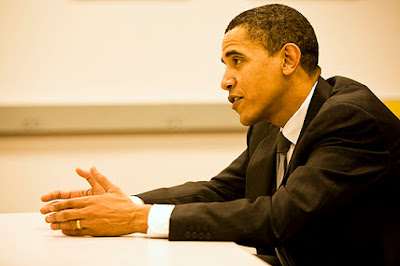 The byline on today's Washington Post op-ed article titled The Action Americans Need states simply "the writer is president of the United States."

I liked the understated style of the piece, Mr. President. Everything from the direct, declarative title, to the use of only your name, "Barack Obama", to the logical way one paragraph progressed smoothly into the next.

With your radio addresses, weekly podcasts, yesterday's TV interview blitz, next week's planned prime-time news conference and a subsequent address from the Oval Office to the American public, it looks like you have become a one man public relations effort in your bid to get your economic recovery bill passed.

Today's plainly worded seven hundred and sixty seven word missive in the Post, with a straightforward message that keys on the need for a sense of urgency to drive any action the government plans to take to get our nation’s economy on track, is not the kind of thing that would tax you, President Obama - we all know you are well versed at expressing yourself through your keyboard.

We often think of our presidents as hands off executives, who have someone on their staff to do just about everything but chew their food for them.

But the language you used, the repetitive cadence near the end that mimics your speaking style, and the fact that this is the same thing you have been saying for the last two weeks suggest to me that you probably whipped this article out in an hour or so, which is about the amount of time it took me to write this piece, although you probably had a little editorial input from your chief speechwriter.

There are a lot of the same words and phrases in here that we’ve been hearing over and over - "crisis", "jobs", "savings", "homes", "renewable energy", "health care", "education", "energy independence", "health care" and "partisan gridlock" - the same issues you campaigned on, and the same issues you’ve been talking about everywhere there's been a live microphone in the last few days, which is why I don’t think it took you too long to write this yourself.

It's a great effort, and the buzzwords are nice, Mr. President, but you are going to have to expand your narrative a little wider. Maybe you can trot out a team of economists. Not the Nobel Prize winners, but the ones who teach econ to college freshman, the kind who can do question and answer sessions with the media that will bridge some of the gap between what the American public doesn't understand about your plan and what you believes it will accomplish.

If you were to speak to the American people on Monday intimately, in specific detail, and without reservation, the way you did when you delivered your "race" speech in Philadelphia during the Democratic primary campaign, it would be a great help to your cause and our futures.

If you were to expand the narrative this way, instead of merely rebutting the reactions and the spin of the Republicans who are against your stimulus bill, it would significantly reduce the potency of the "us versus them" dynamic that is currently threatening to curtail widespread support for your proposals. More importantly, it would help you to step outside of the box the press corp want to put your presidency into already, a group which may be more dangerous than your political opposition.

Turning your one man public relations endeavor into a group effort will go a long way towards getting the kind of public support you need to get your stragglers in Congress on board.