Moving On To Your Next Shot 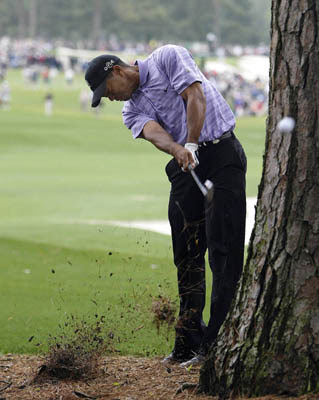 President Obama, you've had a long week. Lost a nominee. Had to cut stimulus plan. Capped exec pay at banks living on the federal dime.

And I imagine, just two weeks into living at the White House, that you've had to make some adjustments. Tried to get used to the brand new mattress they put on your brand new bed. Wondered how long it would take to get used to the whole live/work/play in one space idea. Wistfully recalled the days when you could get the attention of five or ten million of us from your computer without even putting on a tie.

The good thing about your new job, Mr. President, is that its a lot like playing on the PGA golf tour. Every time you get ready to tee it up, there is a scoreboard, right behind you, that shows how you're doing. The world's number one golfer, Tiger Woods, doesn't always get the ball on the fairway. He doesn't always hit the green on his approach shot. He might end up with a lie beside a tent, or behind a tree, or next to a rock.

Getting in trouble on one or two holes, even if they are back to back, doesn't faze Mr. Woods. He does what he has to do - turns the club head backwards, swings from a left sided stance, putts with his driver off the fringe- whatever it takes to get the ball in the hole.

And on Sundays, more often than not, he is in one of the final groups, with a chance to win.

So don't worry about these bumps in the road this week, Mr. President. You're still on the first hole, lining up your approach.

Just take a presidential mulligan, and bring your "A" game the rest of the way.

And when you've made a bad call, like you did with Daschle, leave it behind you. Move on to the next shot. When you've got to play politics, like you've done all week with Congress, and Rush, and us, including today on your radio address, come at it from any which way you need to in order to get the outcome you think the American public deserves.


And when you need to do a little trash talking, like you've done about Wall Street execs...