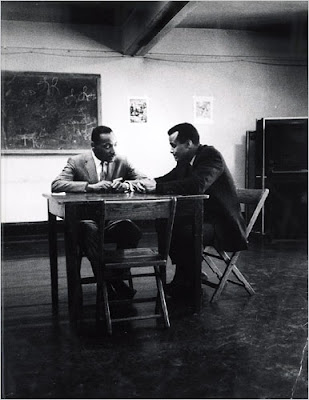 It just so happens last night that I have just put down Bearing The Cross: Martin Luther King and the Southern Christian Leadership Conference, a book by David Garrow that traces Martin Luther King's involvement in the civil rights movement, to get on the internet for a few minutes before going to bed when I see this headline that says "MLK Papers Pulled From Auction".

Harry Belafonte, it seems, is selling a few papers he has of Martin Luther King Jr. at an auction to raise funds for worthy causes he supports. At least, he was until yesterday, when he withdrew the items from the planned Sotheby's auction because the King Estate objected.

In a further coincidence, it just so happens that I have just gotten through the part of the book that describes the failure of the Albany, Georgia civil rights demonstrations in 1962 . This is the part where Martin Luther King has been hornswaggled into participating in a protest whose underlying currents he does not fully understand.

The SCLC's slogan "jail, no bail" was starting to work a little too well, inspiring marchers across the South to submit to being peacefully arrested as a show of commitment to their cause. SCLC organizers who were involved in the Albany had promised the black citizens who marched that they would be bonded out of jail quickly by outside supporters. Hundreds marched. Hundreds were arrested.

But the SCLC had raised nowhere near the amount of money required to bail them out.

So who did King call upon in New York to help raise money from Northern sympathizers to get these people out of jail?

Why did Martin Luther King Jr. call on Belafonte? Because he had met the politically active actor during his earlier forays into New York when the movement was just getting started. Martin and his wife Coretta developed a close bond with Belafonte over the years, and the SCLC benefited greatly from his involvement in the movement when they had emergencies like the one in the Albany demonstrations.

Without a nationwide network of hard working, like-minded sympathizers like Belafonte, there might well have been no "I Have A Dream" speech.

From The New York Times

In a telephone interview before Mr. Belafonte withdrew the items for sale, David Redden, vice chairman of Sotheby’s, said that the outline for the anti-Vietnam War speech was written in Mr. Belafonte’s Manhattan apartment.

The notes from Dr. King’s pocket, Mr. Redden said, had originally been given by Mrs. King to Stanley Levinson, an adviser to Dr. King, who left the notes to Mr. Belafonte.

Mr. Redden said that Mrs. King had given the condolence letter to Mr. Belafonte.

Martin the III, Dexter and Bernice King are often in the news here for asserting their rights to their heritage. It appears that the entity the King Estate uses, Intellectual Property Management, is at it again with a "zero tolerance" policy that seems to originated with the King children, and may have even been influenced by their late mother, Coretta.

Thinking about this from the perspective on an ordinary person, I can't really begrudge the King children for making money from their father's image, likeness, and copyrights. In America we sell everything else - why not? Because the reality was that a young, attractive black widow with four kids and practically no money back in 1969 was not going to find a rich Greek shipping tycoon to marry her. She wasn't going to run into a wealthy African prince, or a rich black American businessman either.

Harry Belafonte is not just anybody to the Kings. He lent his celebrity stature, international prestige and powerful political capital to Martin Luther King Jr. until his own public image became fully formed. He lent his apartment in New York to King whenever he was in town, the same apartment where he wrote the anti-Vietnam speech.

Prominent black men and women all across the country hoisted the short man from Atlanta with that big voice on their shoulders and kept him there until the world accepted him as somebody whose voice counted for something important. And Belafonte was there after King's death to give counsel and financial support to their family.

Given Belafonte's activist track record throughout his life, it is much more likely that he would direct any proceeds from the sale of these documents to worthy causes than the King Estate.

I don't think civil rights movement pioneers like Belafonte owe the King children anything. The vigilant protection of their father's rights is one thing, but in this case, a special exception should be made for people like Belafonte.

In my mind, a picture of Martin the III, Dexter and Bernice standing alongside Harry Belafonte with a presentation-sized check made out to worthy cause might be the best photo opportunity these three "owners of the dream" have had in years.