We Are Finally Connecting The Dots 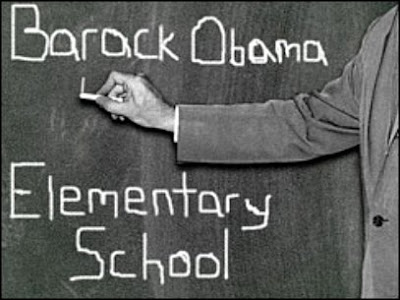 A story that caught my eye the other day was the announcement by a school in New York that it was changing its name to Barack Obama Elementary School. The thing I’ve been preaching about has come to pass – just the presence of that brown skinned face on TV every night as Barack Obama gets closer to being sworn in as the 44th president of the United States has already begun hold the attention of those of us who have traditionally felt that our government has given us the short end of the stick.

(CBS/AP) A school on Long Island has been renamed Barack Obama Elementary School in honor of his historic rise to the presidency.

The move at the largely black and Hispanic school in Hempstead is among the first in what will likely be a wave of name changes around the world now that Mr. Obama has been elected president, from schools and streets to parks and mountaintops.

It will give a whole new dynamic to that age old question that strangers like to ask children under ten when they have nothing else to say.

“And where do you go to school, young man?”

It will be the most invigorated answer to that question EVER.

After a few enjoyable moments picturing New York City children shouting the name of their school at the top of their lungs, I had a sobering thought. The schools named after Martin Luther King Jr. house some of the poorest performing student bodies in the country. The streets named after Martin Luther King Jr. seem to draw drug dealers and petty criminals like magnets, and often sport the highest black-on-black crime rate in their local area.

This psychic hunger we have to be wholly recognized by all of society as full participants in all things American, combined with a nationwide hot flash among African Americans over the election of Barack Obama to the presidency, is the most unique moment in the history of black Americans in the country, where inspiration can finally band together with perspiration and preparation to elevate all of us, not just some of us.

If you click on the link to the article, you will see a collaboration between students, teachers, administrators and parents, a rare instance where our entire community collaborates its energies and resources all in the same direction, an exercise in "connecting the dots" that should make those of us dedicated to doing the wrong thing tremble in our shoes. My chest swelled with pride as I read about black children who live in a world of electronic everything WRITING ESSAYS and HAVING DEBATES about a presidential election that has consumed their total interest.

THIS is the real black America, the one I grew up in, the one we all know exists but can never seem to find anymore. THIS is how we have to tackle our problems - intelligently, forcefully, lawfully, and with the highest honor to ourselves and to our history.

So if you've never believed anything in your life, you need to believe that this IS our moment, that this IS our time, in a way that inspires a missionary like zeal in you to connect with as many parts of your community as you can TODAY.

Because I am not interested in seeing crackheads leaning on the "Barack Obama Boulevard" street sign ten years from now.