Obama Has Got To Give It Up 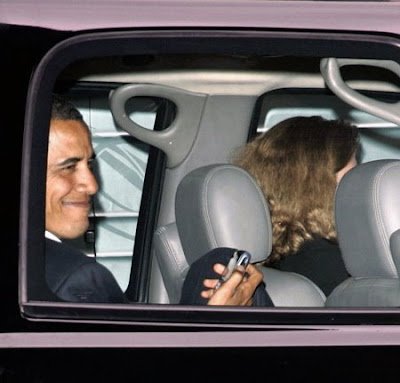 Barack Obama has led a charmed life this year. He came back from a loss in the New Hampshire primary with a big South Carolina win. He survived Rev. Wright, the “Hardest Working Preacher In The Pulpit”. He weathered backlash from “bitter” white Americans. He was so nice to Hillary Clinton it almost drove her crazy before she finally suspended her campaign.

The Greatest American Hero didn’t faze him. Caribou Barbie could out wink him, but she couldn’t out think him. And Joe The Plumber found out that the “being a celebrity” thing Obama seems to have down pat is waaay, waaay harder than it looks.

But there is one thing the next most powerful man in the free world (as long as China doesn’t want its money back anytime soon) won’t be able to overcome. One day next January, an outstretched hand is going to reach out to Barack Obama.


And Obama will probably have to fight back tears - as he surrenders his Blackberry.


Giving up his favorite gadget will probably take more of a toll on him emotionally than giving up his seat in the Senate today will.

As president, though, he’s got to give it up. Caribou Barbie herself illustrated earlier this year that an email account can be a dangerous thing if it gets into the wrong hands.

A confirmed Blackberry addict, it may take Obama some time to get used to this. You may see pictures of him at a State Dinner, bored by a Saudi Prince complaining about wife number twenty three’s cooking, his head cocked back, his eyes angled down and to his side, peering into an empty hand before he catches himself

You may see him at a White House press conference, uninterested in the reporters question, his thumb dialing an imaginary wheel like he has a nervous tic.

The most wired presidential candidate in history is going to be cut off from the world as he knows it, a world where he had a link to the entire planet in his pocket.