The Most Watched Black Woman In The World 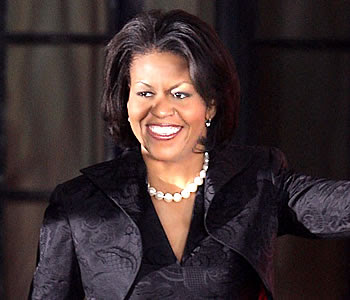 I'm ready to get back to "The Most Watched Black Woman In The World" program, starring Michelle Obama, premiering next January on every news channel on the planet.

The good thing about the White House is that it produces as much spin on the First Family as the producers at the Bravo! channel do for their Real Housewives franchise. One of the things that used to be a real sore spot among black folks, especially in the seventies and eighties, was the way black people were portrayed on TV. One bad image was one too many for a lot of us, who felt that with so few roles in TV, anything that negatively portrayed black people was perpetuating the very inequalities we were trying to eradicate.

You don't here as much about this these days - whether or not a lot of that has to do with the demise of UPN I don't know. But I can still watch an entire night of TV and see no black actors in starring roles.

Reality TV is scripted, with exaggerated personality conflicts, artificially contrived settings, and the most provocative editing decisions you can find outside of the Fox News studio, all done in an effort to force their preconceived storylines to pay off with a big bang. Bravo! will play these shows to death for a few more weeks before bringing something else into their rotation.

The White House spin machine will just be getting started. Michelle Obama will not be on TV as much as her husband, but she will be on there a lot, talking about real issues and real problems facing American families. The most watched black woman in the world will be on camera in her own hair, wearing tasteful accessories and keeping her cleavage to herself. The producers of her clips will have a mandate from the Office of the President to leave all the bloopers, bad angles, and awkward sounding phrases on the cutting room floor. What the cumulative effect of seeing thousands of positive minded clips and soundbites of this image of a black woman will be, I can't say.

I'll just be glad to finally see THIS kind of spin begin.