Foot Soldiers With No Guns And No Bullets 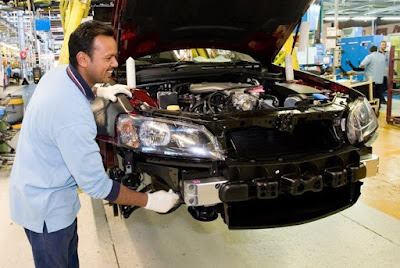 Say I work for GM.

Become line manager after twenty years on the job.

Faithfully purchase company stock through the years, which ends up comprising almost 50% of my retirement/savings fund, because...well, because the guys in the front office send me memos every month telling me that investing in the company I work for is not just a good investment, its darn right PATRIOTIC to put my hard earned money behind the products I help to build.

These are the same guys in the front office who have told me year after year in the same memos that they "have a plan for the future", and that "the company's prospects for growth have never looked better".

Since I'm a line manager, according to the GM organization chart, I have absolutely no say so in the direction of the company. In fact, I have very little say so on the line I manage, other than the prescribed remedies for dealing with problems on my section of the line - and if I don't use the GM front office approved protocol for dealing with any issues that may arise, I will quickly find myself out of a job.

I'm a foot soldier with no gun and no bullets.

When the people in the front office, who have walked away with millions in stock options, not because they got money deducted from their paycheck, but because they took the spread between the strike price of one year's option grant price and another, higher strike price of another year's option grant price - a "cashless" exercise of option grants - they have walked away with free money for meeting goals that they set for themselves.

If you were a gambler this would be known as "stacking the deck" in your favor.

American business management may not do a lot of things well, but they are the world's best rationalizers - if their ass was on fire, they'd tell you how it was a "strength building exercise", even as they urged you to hurry up with that fire extinguisher.

Since I'm a line manager, I don't rationalize so well, because it is impossible to convince my superiors that my people aren't slowing down the line if they aren't doing their job properly, and in a timely manner.

It is even harder to convince myself, when I am reading the section of the paper where it explains exactly what happens to all my company stock I've worked so hard all these years to buy when a company wipes out its legacy costs by going through a Chapter 11 bankruptcy, not to empty my bank account of all the money I have left in it so I can see how many rounds of ammunition it will buy after the gun store owner has deducted the cost of the semi automatic weapon I have selected.

To this imaginary line manager, and the thousands of real people like him who take their orders from the top, none of this is academic. His money is personal. His money disappearing is more than personal, it is an act that should carry the same punishment as a capital murder charge - because whoever pulls the trigger on a bankruptcy to "get rid of legacy costs" has deliberately slaughtered his financial future in a premeditated manner.

Houston is just now recovering from Enron, a company who has a fraction of the influence on Texas that these companies will have on the state of Michigan.

If government is "for the people", then it needs to do its job. And in case anyone in the government has forgotten why they went to Washington, I will give you a news flash – your real job isn’t to feed us when we are on the bread lines, but to keep us off of them in the first place.