Biggest HALLELUJAH! Of Her Life 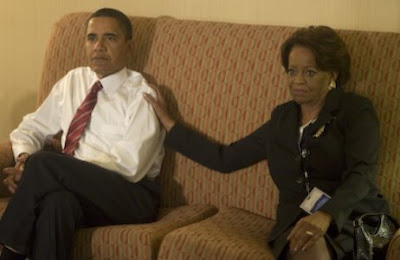 The seminal photo for me last week was one taken of Barack Obama moments before the television networks announced that he would be the 44th president of the United States. He was seated on one end of a couch in a hotel suite adjacent to Chicago’s Grant Park, looking a little dour, while his mother-in-law's arm extended from her perch at the other end of the couch, her care worn hand clasping the back of his shoulder, both of them staring at the television screen in front of them as if they could see their own futures.

Mrs. Robinson’s face was as familiar to me as the faces of the women who had managed the periphery of my youth. I recognized in her piercing eyes the power of all my surrogate mothers, from my aunts, and my neighbors, to the ladies who ran Vacation Bible School and the ladies who operated the neighborhood community centers in the summers. The determined resolve I saw in the tight clamp of her lips was a look I knew too well, as if she could barely keep hold of the emotions coursing through her body.

For all of her official reactions that were recorded for posterity by the photographer in that hotel suite last Tuesday night, there are other, more powerful displays of emotion that surely must have come later. Because the women I talked to over the last few days, black women who have the same grey hair, the same pursed lips, the same piercing eyes – my mother, my aunts, and an assortment of likeminded women who collectively raised me when I was a child – have been releasing the biggest HALLELUJAH of their lives the past few days.

Rappers may have popularized the phrase “make a dollar out of fifteen cents”, but these women have lived it, and in many cases are still living it as they oversee daycare centers, manage after school programs, and organize efforts to make sure that the children who often do without get to see a little sunshine in their lives sometimes.

I’ve read a hundred stories in these last few days since the election. Listened to countless broadcasts that tried to pinpoint the turning points in the campaign season that led to an Obama victory. Only one or two of the stories in print even acknowledged that Mrs. Robinson, who managed Mali, Sasha, and whatever else that could only be handled by her hands alone, had a role of any importance in the grand scheme of things.

So I’ll say it here – the ONLY reason Barack Obama can stand before you today as the next president of the United States is because of Mrs. Robinson.