Just Who Is Valerie Jarrett? 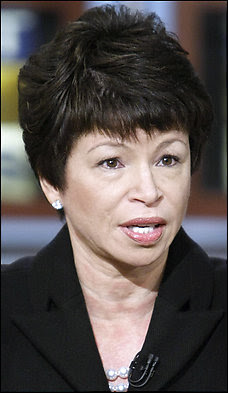 Valerie Jarret's name seems to be everywhere these last few days as aides to Barack Obama float her name as a replacement for Obama in the Senate.

Just who is she?

Meet Valerie Jarrett, the Woman Who Taught Al Sharpton to Lower His Voice.

One of Jarrett's better-known conferees has been the Reverend Al Sharpton. As Sharpton tells it, he was initially skeptical of Obama — until Jarrett went to work on him. "Part of what moved me from, 'Who is Barack Obama and what is he really about?' to 'Yes, this is a guy who can help make changes even if we're not on the same page in terms of style and approach'--a lot of that came from talking to her," he gushes …"

"The second influential friend in Obama's brain trust is Valerie Jarrett, who joined the campaign in the summer of 2007. At the time, insiders say, Obama didn't appear to be catching on with voters, and the mood among staffers was "Aw, man, this isn't working. These guys just aren't doing it right. They're just gonna run a bunch of ads, and then it's gonna be over." Axelrod and Plouffe were counseling patience, but the national poll numbers showed them 30 points behind Clinton. It was a combustible moment, and it could have sparked the kind of backstabbing and infighting that have destroyed so many Democratic campaigns. But Obama pre-empted any uprising by bringing Jarrett to the table to be his voice on the senior team when he wasn't in the room. Instead of an implosion, there was a change in course. Obama began to draw sharper contrasts between himself and Clinton, and the campaign began to gain ground. "Everybody kind of just swallowed and worked things out, and the warship didn't really have a dent," recalls one insider.

Jarrett, a longtime deputy to Mayor Richard Daley, met Obama in 1991 when she hired his wife, Michelle, as an assistant to the mayor. A well-connected Chicago insider, Jarrett is the most influential woman and African-American in Obama's inner circle. Her primary role is to pierce the bubble of the campaign — to shoot straight with the candidate and to give the two Davids some push-back on strategy. Accomplishing the latter task is easier than it sounds: Jarrett has known Axelrod for more than 15 years and worked closely with him on Daley's mayoral campaigns. Described as "the other side of Barack's brain," Jarrett plays the same role for the candidate's wife. "I help form a bridge between Michelle and the campaign," she says.

Jarrett describes her relationship to Obama as fraternal. "I don't have a brother," she says, "so he is like family to me." Indeed, Jarrett's personal relationship with Obama gives her a subtle, calming influence that others can't match. When Obama was cooped up in the office of his Hyde Park home after the Rev. Wright fiasco, writing the speech on race that would rescue his campaign, she reached out to him to give him a chance to let off some steam. "He was under a lot of pressure because he decided to do this speech on very short notice," she recalls. "So Sunday night, I know he's up writing this speech — Barack does a lot of his writing late at night because the house is quiet and Michelle and the girls are asleep, and that's when he thinks best. And I had heard this hilarious story about a friend of ours, and I thought, 'Well, I'll send him an e-mail. If he's focusing on his speech and he doesn't want a distraction, he can ignore it. But if he wants a break, he can lighten the mood a little bit.' He called, we had a very good laugh, and then we went back to work."

Jarrett also helps Obama with humanizing touches that — for all of the candidate's transcendent stage presence — sometimes elude the former law professor. The vivid anecdote with which he closed his speech on race — about the white campaign organizer named Ashley who, as a child, ate mustard-and-relish sandwiches during her mother's battle with cancer — was a story Jarrett had picked up on the campaign trail in South Carolina and related to Obama on a late-night flight to Georgia."

"...Valerie Jarrett's real clout comes less from her career than from her extraordinary connections and seemingly endless capacity for extracurriculars. As one observer put it, "She knows everyone in Chicago." Obama's media adviser Anita Dunn recently cracked that "she may be one of the most plugged-in people in the United States." Or as Susan Sher says, "Whatever situation she's in, she rises to the top," enumerating how Jarrett did just that at City Hall, where she ended up in the famously difficult post of chairing the Chicago Transit Authority for eight years; at the Chicago Stock Exchange; and on the board of the University of Chicago Hospital, which she now also chairs. "She is like a god in Chicago, an icon," says Adrienne Pitts, a 40-year-old lawyer who takes every opportunity to see Jarrett speak at events around the city, something she does with less frequency now that Jarrett is so often traveling with Team Obama or helicoptering into problem situations or trying to catch some of the big, joyous campaign moments and watch history change. That is, when she can get away from her day job."

"Jarrett was born to an African-American family in Shiraz, Iran, where her father, Dr. James Bowman, ran a hospital for children as part of a program that sent American doctors and agricultural experts to developing countries to help jump-start their health and farming efforts. At age 5, the family moved to London for one year, then returned to Chicago in 1963. Her father, who is of African American descent, is a pathologist and geneticist. He is currently Professor Emeritus in Pathology and Medicine, University of Chicago.[3][4] Her great-grandfather was the first African-American to graduate from M.I.T., her grandfather was Robert Taylor the first black man to head the Chicago Housing Authority, and her father, Dr. James Bowman, was the first black resident at St. Luke’s Hospital. Though Ms. Jarrett has never worked in Washington, her great-uncle is Democratic powerbroker Vernon Jordan. [5] Her mother, Barbara T. Bowman, is an African-American early childhood education expert and co-founder of the Erikson Institute for child development.[5][6]

She graduated from Northfield Mount Hermon, a New England boarding school, in 1974. She also received a B.A. in Psychology from Stanford University in 1978, and a Juris Doctor (J.D.) from the University of Michigan Law School in 1981."

Divorced after a brief marriage, Jarrett is a single mom and has one daughter, Laura, who attends Harvard Law School.

Jarrett's efforts and input will be felt at the highest levels of the Obama administration now being formulated between Washington D.C. and Chicago.