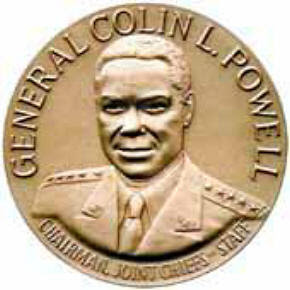 For years, Colin Powell has been the Republican Party's favorite black man, their beloved "Head Negro In Charge" who didn't threaten any of the Party's leading presidential contenders because he was not going to run for president. He was their light skinned Morgan Freeman - wise, solemn, with a dignity and a bearing that made him the conservative movement's bulwark against the Jessie Jackson's and the Al Sharpton's, an accomplished, polished, no nonsense kind of black guy whose dynamic personality appealed to the GOP's free enterprise capitalism ideologists.

You couldn't have ordered a black actor from central casting, if Morgan Freeman was busy, who could better play the role of the Republican Party H.N.I.C. than Colin Powell. Which is why Sunday's announcement of him coming out in support of Barack Obama was all the more heartbreaking for John McCain and his allies.

In an excerpt from a piece of short fiction I wrote a couple of years ago, titled The Black Folks Guide To Survival, I expounded on the Colin Powell and Condolezza Rice's images within the power structure, and how they were relevant to any young black professional who had his eyes on the executive suite:

There are ex-Crackers out there, especially the ones you work with, who wonder why we all can’t be like Condoleeza Rice or Colin Powell – smart but not uppity, aggressive but not angry, ambitious but not power hungry.

As unpopular as some of the decisions are that Rice and Powell have made in our community, they are still two black folks in blue suits using complex language on television to articulate their thoughts.

DO NOT FALL FOR THE OKIE DOKE! Condi and Colin don’t want to get to the top spot in their organization. You do. If your goal is to be “The Man” in your organization, you are going to have to take the gloves off and duke it out sometimes.

As I watched Powell calmly and methodically lay out his reasons for supporting Barack Obama, his mannerisms seemed reminiscent of those of a high school principal who has gotten tired of his students who are perpetual troublemakers. His blunt assessment of his own party's failings was probably the most candid seven minutes of presidential election commentary that has been shown this year.

The talk radio court jesters didn't miss a beat, mercilessly pounding on the validity of Powell's actions since then, but what they don't seem to realize is they are not talking about O.J. Simpson.

Colin Powell has stood in foxholes.

Colin Powell has four stars to go along with the rank of general.

Colin Powell has been the chairman of the Joint Chiefs of Staff.

Colin Powell has served as the Secretary of State of the UNITED STATES OF AMERICA.

Beside Powell's thoughtful, measured comments, these radio shills sound like all the other pretend Republicans and fake conservatives who feel the need to cling to a rigid ideology instead of allowing their thinking to be guided by core principles. The "Straight Talk Express" can't haul much more of this hypocrisy - the wheels were already starting to fall off of the McCain campaign.

Rush Limbaugh and his cohorts are trying to turn the clock back to 1945, when black soldiers who fought to keep America free were supposed to get back in their "place" when their ships hit our shores. When the black man's opinion, whatever his station in life, only mattered when the rest of the country wanted it to matter.

The drumbeat on the airwaves, the kind of revealing dialogue being shown between these scared white men and their audiences about what THEY'RE feeling - by last night, when the evening news shows came on, I had become more than a little ticked off, partly at myself for lumping this rhetoric into the same old "this is the kind of shit black people have to put up with" and partly at the way the media pundits had taken out their toolkits to subtly reshape the boundaries of discussion, imperceptibly pointing their commentator colleagues into directions they were more familiar with.

If our faith-based friends would only exhibit a little more "faith" in the process, instead of worrying about what they see in front of them, I think they will be able to get through this.


Because Colin Powell and Barack Obama are going to be black for a long time.