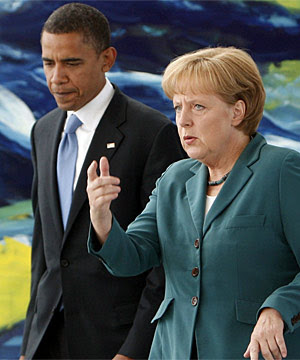 Barack Obama will deliver an address today at the "Victory Column" in Berlin's central Tiergarten park. Obama will speak to the chancellor, Angela Merkel, and Frank-Walter Steinmeier, her foreign minister and chief rival, before his speech at the Siegessäule at 7:00pm local time.

Before departing for Germany, Obama told reporters that his speech will consist of a "substantive articulation of the relationship I'd like to see between the United States and Europe."

"But he is not president of the United States," a reporter reminded the adviser...

Chancellor Merkel appeared to warm to Obama yesterday, when she told a news conference that the young American candidate "is well-equipped physically, mentally and politically".

Around 700 policemen will be in place for the visit and city workers have been setting up barriers around the "Siegessaeule", a 226 foot high column built to celebrate 19th century Prussian military victories over Denmark, France and Austria, since Monday. Crowd forecasts vary widely, ranging from 10,000 to nearly a million that are expected to show for the event.

“I doubt we’re going to have a million screaming Germans — let’s tamp down expectations here,” Mr. Obama told reporters as he flew here from Tel Aviv, joking that he only recently learned that his audience was expected to be so large.