In My Father's Arm 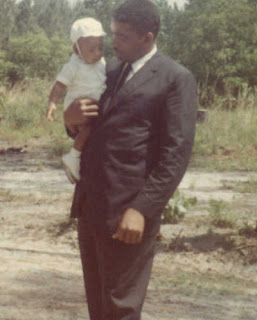 The first house he lived in was literally a barn, a tin roofed structure scented with the aroma of the corn and the meal that used to be stored there - this, his birth home, still stands on the farm where he grew up. To stand in that barn now and look out that door, it is utterly amazing that a man whose first view was of the few cleared acres around him would see so much of the world in his life.

Both of my parents were raised in male headed households. Their fathers, born after the beginning of the twentieth century, were the kind of men who protected and nurtured their children, advocating the importance of education even though they themselves didn't have very much. Men who could also be as hard as the steel in the plows they walked behind, demonstrating through their own actions the importance of delayed gratification, and meting out stinging punishment to their progeny who forgot to toe the line.

There is no void for me and my brothers - my father, in his own way, has always been larger than life. He is always imploring us to jump higher, run faster, to leap tall buildings in a single bound. He is forever prodding us to be engaged in the economic and political aspects of our community, where ever we might live. And he is forever vigilant against those who seek to impose their will on him or his issue.

These days, my father inhabits the same suburbia the rest of America does. The kerosene lamps from that old barn have been replaced by light switches. The stifling Southern summer heat is fanned away by central air conditioning. The logs, which come pre-split, are only used for decorative fires in the winter. The only cotton that has touched his fingers in years are in the shirts he wears.

My father's arm, the one holding me in the picture above, is still there, forty one years later, when I need it. He still studies me as intently now as he did then, still able to sense instinctively when something is wrong. And all those jobs he has had, and all the stories he has told about them - now, they inhabit the stories I tell.