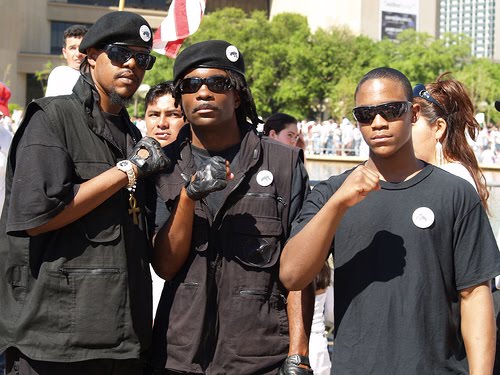 Two chump change looking negroes with a nightstick have the entire right wing of American politics in an uproar?

Two ridiculous looking negroes who would be laughed off of a rap video set for looking like fake-ass black power advocates have got the FOX News "Bimbos With An Attitude"'s thongs all in a knot?

Watched FOX last night with a friend for some laughs - FOX is NUTS over this New Black Panther thing - but who the hell are they?

And why should I care?

The way Sean Hannity and Bill O'Reilly are acting, you would think there were 20 million black folks running amok amongst the rest of the 300 million plus people in the U.S, instead of a group so small 99.999999999% of all black people in the country can safely say that they have never seen a real live member in the flesh.

I guess I’ve been in my own fiction writing and rewriting bubble the past week or so, because I can’t believe how much press these punk looking black pantherites in PA are still getting. I mean, you would think Tweedle O'Reilly and Tweedle Hannity (tweedle dee and tweedle dum for those of you who are still caught in the glare of the FOX tractor beam that zaps your IQ 40 points) were talking about Timothy McVeigh types or something, AFTER he blew up the federal building in Oklahoma.

Fuck Malik Shabazz, better known as Paris Lewis to his momma, and the TV camera loving studio thugs he calls the New Black Panther Party. The only thing blowing up on these Nubian nincompoops are their cell phones. But the more important question, since I am sure there are emails circulating with a BOLO style warning amongst all the RedStaters and Michelle Malkin zombies, is this – just how many New Black Panthers are there?

Can I get a witness?

The New Black Panther website says they have 27 chapters. Other sources claim 35. Several of these are purported to be in foreign countries. And no where can I find a number of registered, dues paying members – not even an estimate. Not even an educated guess.

I jokingly said to my buddy last night that FOX gets its angry blonde newscasters from Hooters, but maybe its true, since they don’t seem to understand or care that their story is very, very light on verifiable facts. We all know that the Cracker Nation FOX caters to don't feel right unless black bogeymen are handy to blame.

You can't say they don't bend over backwards to please their audience.

It wasn't until two o'clock in the morning that I read something on the internet that made me want to call my buddy right then. But I though better of it, and waiting until morning to tell him that the black dude who proudly says he's running things at the New Black Panthers Party is a fellow Howard Law grad.

My buddy sounded so glum after I told him this, I started to feel sorry for ruining the start to his day.

"I heard their was some radical brother who was there after I left. That's him? Damn."

There must be a website somewhere, or a service like Rentboy.com where black people with apparent following, a convoluted personal and social philosophy that wasn't even relevant fifty years ago, and a burning need to be on TV every night can go and post their pictures and bio. Maybe its called BlackBogeyman.com

Anyway, I'm back in the land of the sane, although there is still a bit of that right wing demagogue taint on me. Watching FOX News is like getting sprayed by a skunk - three days later, you still have trouble getting rid of the stench.

As far as I'm concerned, FOX can keep these deranged black people they lift out of obscurity. Take 'em home with you, Sean. Adopt 'em, Bill, like Angelina Jolie. You make 'em famous, you have to live with 'em should be the rule.