The Michael Vick Project: What I Saw 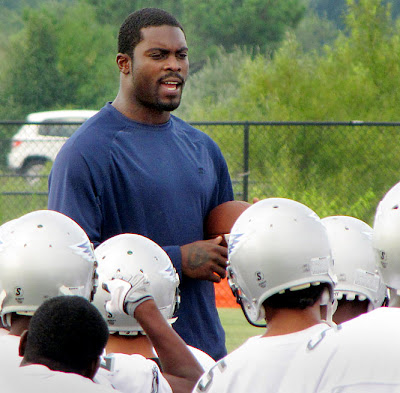 I'll be back to politics in the morning -- right now, I will have to say that the verdict on The Michael Vick Project documentary is, "it's all good."

Someone sent me a review of the show that was in the Washington Post earlier today. Now I see why I have to keep writing this blog. I don't know what Hank Steuver, the Washington Post staff writer who suffered through the half hour episode, expected to see -- maybe a pledge from Mike that all of his future earnings go to animal rights shelters? Maybe an Academy Award worthy performance of pathos and some sort of overly heartfelt confessional moment that would have me ready to throw up?

I don't know Michael Vick at all -- have never met him in person, never been any closer to him than the club level seats at a Falcons game in the Georgia Dome -- but to try to translate the actions of a man who grew up in the squalor and despair of the Newport News projects for Midwestern sensibilities is a losing proposition from the getgo.

But that's what the Washington Post is supposed to do - tell you how or why the rest of the world can't possible measure up to the arbitrary standards it imposes on the subjects of the stories it publishes in an often feeble attempt to prove that it is an unbiased observer. I've been a writer for a long time, and I know better. We're all biased, each and every one of us who wrestles with these keyboards in front of us, whether we are stamped "approved" by a major news organization or we are out here slinging past participles all by ourselves.

So I am glad that Mike was the executive producer of his show. Its his story -- nobody in the media is interested one iota in portraying him in a positive light.  It is similar, in many ways, to the way Martha Stewart stage managed her own comeback after her time behind bars.

I used to have a business partner from the hellhole section of Gary Indiana who could have been Vick's older brother. He was a little taller, a little more muscular, but with the same intriguing dark skin, the same flash about the eyes, and a smile whose wattage put Vick's to shame. And he had also been a star high school quarterback.

But he didn't go to college. He went into the military. When he came out, he sold drugs for awhile until he got his stockbrokers license. And before we became business associates, he became my boss, growing our office to the third most productive branch in our company.

He could get a client to send in a fresh 200K after losing the clients shirt in a stock trade. He could beat up most of the brokers who worked for him. He might drink his lunch. He could get lost in a strip club for hours, even when we had work to do. He could ask me with a straight face "why are my neighbors trippin'" after describing how a male guest at a late night party at his suburban home, held in the middle of the week, ended up running down the street naked while being chased by an irate young woman.

He was the kind of mixture of good and evil you might have to read about in books if you didn't grow up like he did. And even though in the end he succumbed to forces greater than him, he was never shy about sharing his hopes and dreams as well as his fears and his disillusionment with the fairy tale life he was hoping to get to at the end of the rainbow someday.

Somewhere along the twenty minute mark in The Michael Vick Project, I sensed some of the same raw honesty from Mike that I used to get from my business partner.

The Washington Post could care less about whether or not Michael Vick sinks or swims. I don't have that luxury. I am glad Mike got a haircut. I am glad he started wearing something other than sweat pants and do rags. I am still hopeful that he will buy himself a rack of suits, now that the Eagles have decided to pick up his contract. And I will trust that he will continue to take control of his own narrative, to tell his own story, because he who controls the narrative controls what the public sees and believes.

The irony of the whole show? The Kobe Bryant Nike commercial that aired somewhere during the last few minutes. Kobe Bryant didn't go to jail, but he was in a pickle almost as bad as Mike's a few years ago. Now, he's no longer an accused rapist. Now he's just another one of your run of the mill NBA superstars who has won several championships.

As much as I will continue to pull for Michael Vick the human being, I know as well as you do that the reality of his future lies in the strength of his fabled left arm.

In the meantime, I'd steer clear of the Hank Stever's of the world.