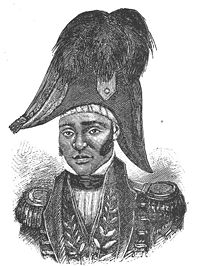 Part. 1.
The people inhabiting the island formerly called St. Domingo, hereby agree to form themselves into a free state sovereign and independent of any other power in the universe, under the name of empire of Hayti.

Back in 1804 after Haiti's slave populace resisted Napoleon's efforts to subdue them, France put down its guns and checkmated Haiti. Before the ink on the Haitian declaration of independence was dry, France called on all the advanced nations of the world to freeze Haiti out of the international finance game.

By 1806 these countries, including the U.S., who had all coveted Haiti's powerhouse economy, the largest in the Caribbean, all agreed to put a financial embargo on the new West Indian nation of blacks. It was only after Haiti agreed to pay reparations to France for the loss of the economic productivity of its former slaves that the rest of the world accepted Haiti into the finance arena.

They have been paying interest ever since.

That 150 million francs was more than twice Haiti's net worth in 1825. If you think about it, it might have been the first subprime loan in the world. To add insult to injury, Haiti was forced to borrow a third of the money to pay these reparations back to France from France itself, at 6 percent interest.

Could you imagine the British rounding up the rest of the world after the Revolutionary War and demanding that America pay them a sum equal to twice the country's net worth at the time,or else be subject to a financial embargo and the possibility of being attacked by its allies?

As I said at the beginning of the year, the narrative is the thing. We are not in charge of our own narrative, nor are enough of us versed in our history to counter the revisionist version our government and our presidents have used to advance programs and policies that twist the sword of U.S. domination ever so slowly in the gut of countries like Haiti.

Which is why you are going to get the "helpless Haitians" theme and the "corruption plagues the country" meme in all the background stories the major outlets release, as if there is no evidence that shows that our own government, among others, has for decades upon decades worked to keep Haiti in a state of chaos and financial upheaval, beginning with the very first $750,000 the United States sent France over two hundred years ago to help put down the original Haitian slave revolt.


The paradoxes of Haiti are not all historical:

We can send money to Haiti, but Haitians can't seek refuge here.

We can support Haiti's efforts at democracy, but only if Haiti supports unfettered access by foreign capitalists to their workforce and their resources.


These are just some of the reasons why we need to quit crying our eyes out and start asking some hard questions about what has really gone on in places like Haiti. Lyndon Johnson exploited JKF's death to get his legislative agenda passed. We need to do the same thing - forcefully, factually, and relentlessly, while those who have helped to perpetuate the inequities of Haiti are weak and vulnerable on this issue, and while the press are all so hungry for Pulitzer Prizes that they forget who they are really working for temporarily.

And in the meantime, while we are pushing for the real story, we can begin to practice pushing our own narratives instead of repeating the carefully manufactured storylines from the nightly news.

I may sound over the top, or insensitive to some of you, but just in case you forgot, it wasn't that long ago that black people in America were getting beat over the head, kicked, stabbed, shot or hung from trees on a regular basis for trying to gain our civil rights. It wasn't until the ugliness and the blood were photographed and filmed and shown all over the world that some semblance of moral suasion kicked in right there in America enough for us to get from there to here.

And just in case you are a “bootstrapper”, who feels the “real Americans” in the heartland did it on their own, I will connect some dots for you.  The 565 million acres gained in the Louisiana Purchase for $15 million dollars, the acres the government handed out like water in free homesteads to anybody who immigrated from Europe with a strong back, were a direct result of the slave revolt in Haiti.  The revolt made the French abandon their hope of expanding their empire in America. By comparison, the 150 million francs France extorted from the freed slaves was twice as much, when converted to dollars, as the price Jefferson paid to the French to dramatically expand America.

If you are not willing to press for a political advantage while you have the stage, this same tragedy will very likely happen again.  If we are saving people today so they can die in sweatshops for our corporations later, THAT is a travesty