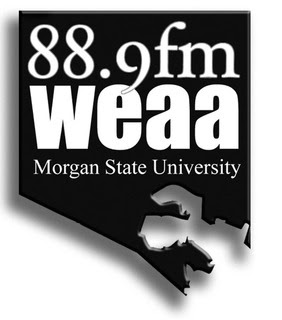 Last Friday I did a thirty minute radio interview with Sean Yoes, who is the host of "The WEAA/AFRO First Edition", an hour-long political talk show on Baltimore's WEAA-FM (88.9 FM), which airs Sunday nights at 8 p.m.

I didn't know who Sean Yoes was, but when I mentioned to one of my buddies that he had played on the HBO drama "The Wire", you would have thought I was being interviewed by Barack Obama himself.

"Who did he play? Was he Omar?" my buddy from Alabama asked me.

My buddy was undaunted. "What'd you say his name was again?"

"Sean Yoes." I heard my buddy shuffle around. "What are you doing - looking him up on the internet?"

The next thing you know he has an episode playing. We found out that Mr. Yoes played Lieutenant Brent Hoskins - what season he was on I couldn't tell you.

The radio interview process itself was something new to me. I have been known to talk until the cows come home, but when no one is recording you, and your audience may or may not be paying attention, you have a whole lot of leeway when it comes to the facts or even actually making sense.

So I was more than a little nervous when the sound engineer called my phone a few minutes before the taping was to begin. Something wasn't working right, so he had to call me back a minute or so later. When he called back, Sean appeared on the line a few seconds later and introduced himself.

"We're on in twenty seconds," he said.

This was it. The last few seconds before-

I said "one-two one-two" the way I'd heard the old school rappers do it.

Sean laughed. "A-ha. There is a brown man at Brown Man Thinking Hard. Whenever I ask a brother to do a mic check, I always get the same thing: 'one-two one-two'."

And just like that, seconds before we were going to record the show, I felt like I knew him. The next thing you know, Sean was smoothly segueing into his introductory patter a split second after the engineer opened our connection.

It was the fastest thirty minutes I've ever had. I have no idea how it really went, other than a point somewhere towards the end when I forgot the question and began to ramble a bit before struggling to rein myself in. I would also imagine, over the course of the whole time, that my voice was all over the place.

But the interview is in the can, and tonight, at 8 pm, it will be broadcast on WEAA 88.9 FM in Baltimore. You can click this link, and push the "Listen Live" button at the top of the page to hear the show.

My radio rope-a-dope might be a little rusty, but it doesn't matter.