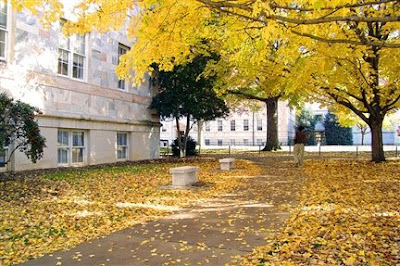 I opened one of the tinted glass double doors to the restaurant Dantannas in Buckhead on a Monday night two weeks ago, quickly scanning the room for familiar faces, before I finally sidled up to the hostess to tell her I was looking for some friends.

"I think they're in the back."

A few steps later, I walked upon a table full of my college classmates.

The posse of five that would cram into a two door Honda Civic hatchback at the drop of a hat to get to a party on the other side of Atlanta.

The guys I started college with, and marched across the stage with four years later (although I didn't actually graduate until the next year, which is another story in itself).

Now we were all alumni, all getting those same calls from the students working in the campus development office who were soliciting donations.

Alumni who are about to roll up on their twenty fifth class reunion soon.

Just before I'd opened the door to the restaurant, while I was walking up to the building, I'd been going over in my mind the reasons why I shouldn't be here - I was still tired from our trip to the Easy Reach Beach, I was still full from a late lunch, I wasn't interested in paying fifty dollars for a steak tonight, and I was too old to be hanging out as late as I figured we would be out and still get to work on Tuesday.

All of that evaporated, though, as I saw the faces of my Ace Boon Coon buddies (that's Number One Negro for those of you who didn't have old school black parents) break into smiles when I got close. In less than three days on campus, we had formed an unlikely band of brothers that has lasted a lifetime. Together, the five of us were The Brain, The Mouth, The Fly Guy, The Clothes Horse and The Big Guy.

Our band of brothers was one short for our reunion - The Big Guy, now the Big Man, was probably incognegro somewhere in Connecticut.

As it turned out, we had more fun than I've had in years, doing absolutely nothing but reminiscing, rehashing and rearranging our past exploits.

It was a storyteller's convention, with each of us trying to elbow our way into the spotlight in order to recount our own stylized version of the decades old details of one of the many, many crazy escapades that filled our college years.

And all the growing pains, social gaffes and legal jeopardy that can come with the territory when you live away from home for the first time.

A couple of us had gained quite a bit of weight. Most of us had lost some of our hair. And then there was the one guy who looked like he could have been walking out of the DUC, our campus student center, twenty odd years ago, he'd changed so little - same hair cut, same boyish grin, same Polo shirt.

We left in the wee hours of the morning.

I called one of them the next morning - or maybe he called me, I don't remember which now.

We sounded like two bullfrogs with strep throat, our voices so low they were practically unintelligible.

Even though we all seem to congregate on the internet these days, where you can practically have a high school slash college slash family reunion all in one night on Facebook, there is nothing - nothing - like seeing your old friends in the flesh.