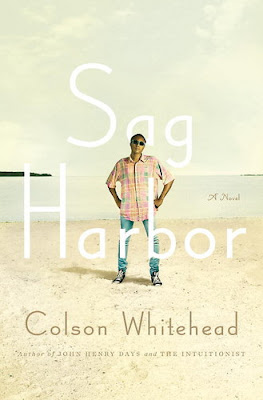 I loved this book.

I don't know if that disqualifies me from writing a review, but there was no two ways about it - I was bowled over almost from the start by the story, because for the first time in a long, long time, I read a story that spoke directly to me. I liked this book so much, I could send Colson Whitehead another twenty five dollars and it would still be a bargain.

I've read Whitehead almost from the beginning, when I came across his seminal debut novel, The Intuitionist, a racial allegory about the fictional world of elevator inspectors that combined insightful poetic lyricism with the taut pace and narrative structure of a detective thriller. His next two novels, John Henry Days and Apex Hides The Hurt, didn't really wow me, but Hemingway didn't have a hit every time out of the gate either, so I took them in stride, wondering how long it was going to take him to get back the authority of purpose he displayed in his first book.

Sag Harbor broke new ground for Whitehead, venturing into territory he'd been consciously avoiding ever since he started writing. At a reading he gave here in Atlanta after his book of essays about New York, The Colossus Of New York, came out, he stated during the question and answer session something along the lines that writers who wrote first person stories about events that paralleled their own lives risked crossing the fine line between art and personal confession.

This one was worth the risk.

Set in Sag Harbor, a small African American beach community in Long Island Sound, the book chronicles one summer in the life of Benjamin Cooper, a fifteen year old African American boy who spends the season at his family's beach house with his younger brother Reggie. Their parents, like many of the people who owned houses in Sag Harbor, were accomplished professionals who had careers to attend to back in New York City. Benjamin's mother had grown up coming to Sag Harbor in the summers herself, and the house the Coopers now owned had been inherited from her parents.

The advent of double income families meant that there were a lot of kids like Benji and Reggie in Sag Harbor for the summer who were left to fend for themselves during the week while their parents worked. The result was the formation of a society of sorts, that included a loose association of kids, mostly boys, who were unsupervised during the week. The resulting high jinks and tomfoolery that the boys engaged in were pretty much the kinds of things I would have done if I were in their shoes.

The thing that Whitehead pulled off in spades, at least to me, was the way he was able to transmit enough of the boys humanity in the first few chapters of the book to allow you to see them as more than children of privilege - "Black Boys With Beach Houses" was how he described his cast of characters early in the book. You didn't have to live this life growing up - I certainly didn't - to relate to this motley band of adolescents.

The mixture of bravado and adolescent yearning was so spot on I felt myself reliving my own youth as Whitehead took us through the social rituals and pecking order divinations of Benji and his friends. His deconstruction of the black teen aged boys penchant for stringing together long winded expletive laden phrases read like a "How To Curse" primer, one I must have memorized myself, because every one of my favorite phrases were there, laid out in all their glory, complete with a helpful diagram to show how we ended up with some of the more exotic derogatory concoctions.

Whitehead brought it all back - terry cloth sport shirts, IZOD Lacoste, the incessant cleaning of the white rubber soled sneaker with tooth brushes and Comet, the phrase "blah-zey blah" - it was all there, this and more, all of the nuances and details that let you understand the author knew what he was talking about.

I was impressed more with the turn of each page, until I got to the part where Whitehead broke down the ancestry of the beat Afrika Bambaataa used in the classic hip hop anthem "Planet Rock", tracing its origins all the way back to the song "Trans-Europe Express by Kraftwerk. I'd forgotten that the author used to be a music critic for the Village Voice way back when, before he became a fiction writer, but it wasn't just that - it was the way he wove this intimate bit of knowledge about pop music into his narrative, doing it in such a way that he taught me something new about "Planet Rock" even as he revived memories of days gone by, that sealed the deal for me.

The hilarity of the boys adventures was leavened by a foreboding undercurrent of family discord, a growing rift between Benji's mother and father that was often alluded to but never shown directly. Benji's parents were bit players, surfacing only briefly in phone conversations and flashbacks until well into the story. Their failure to appear weekend after weekend was in itself a source of rising tension, pushing Benji and Reggie out of their comfort zone and into a semblance of self reliance.

It is actually a book you can take to the beach with you, although you need to beware - if you are the kind of person who needs a big, dramatic climax, or are looking for a story that celebrates the nuances of the nuclear black family the way they used to do on those ABC After School Specials, Sag Harbor may not be the book for you. But if you've read this far, I'd live a little, and pick up a copy, even if you are only going as far as your backyard deck.