And Now....The Helpless Despair Sets In

[Sometimes I run across original research, original analysis, or hard-to-get information that is exactly the kind of stuff I live for - well thought out, well written, well researched commentary, the kind that your media experts get by the pound but think is too much for you to understand.

David Atkins, also known as thereisnospoon to DailyKos members, has given me permission to publish his comments and photos here.]

Let me begin by saying: I know how you feel. I've been there.

As easy as it is to mock your fringe besotted, astroturf corporate, woefully named protests - and the ease with which you are mocked has made doing so almost de rigeur - I will not mock you here. For many of you, these poorly attended, ill-considered events are your first foray into real citizen activism, and your first venture into the art of the street protest.

Insofar as you have taken the opportunity to do in some small way the work that progressives have long done (and usually moved beyond in recent years), I applaud your efforts. It certainly beats slapping a useless yellow ribbon on your SUV and calling it an act of patriotism. For better or for worse, Americans have had a chance to see your ideas, such as they may be, on full display.

Personally, I believe (and the polls would suggest) that your doing so works to our advantage rather than yours, but that is neither here nor there.

Instead, what I want to address here is not what you did during your protests, but how you feel now. You've said your piece and waved your signs, marched in front of the taxpayer-funded buildings and heard the car honks voicing the approval of your compatriots speeding by on your taxpayer-funded roads. You took time off of work (if you haven't found yourself laid off in the new Bush economy) to make yourself heard.

And now you're back at home. Perhaps you're working at the last minute to fill out your belated 1040, frothing at the mouth and cursing the fates with every stroke of the pen.

I want to address the sense of helplessness you feel right now. The knowledge that, in the long run, nothing you did today made the slightest difference.

I know because I've been there. You may recall that about half of America disapproved of George W. Bush's plans to invade Iraq. There was a huge public outcry both here and around the world: by some accounts, some 36 million people across the globe took part in 3,000 major demonstrations against Bush's Iraq policy between January 3 and April 12, 2003 alone.

This was me during a major protest near UCLA shortly after the fiasco at Abu Ghraib had been revealed: 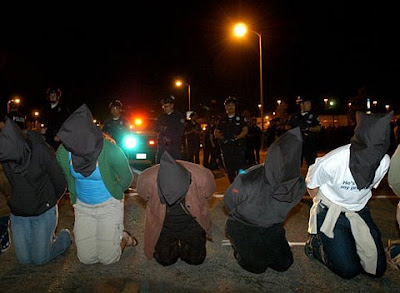 I'm second from the right in the dark shirt. At the time it felt good to make a statement. It felt righteous. It felt like I was making a difference. Eventually, however, I came to realize the pointlessness of such political theater.

Over the years to come, millions of Americans repeatedly engaged in protests against the invasion, the war, and the occupation. They did so in numbers that dwarf by far the pittance that showed up to your tea parties--and they did so without the help and support of entire cable news organizations and the biggest voices in AM radio. Starting in about 2005, they did so with the support of a majority of American public opinion behind them in opposition to the war; by contrast, polling shows that your negative views of Obama's economic policies are a small minority.

And none of it mattered in the least. All those people, myself included, speaking all that truth to power, accomplished precisely nothing.

Because at the end of the day, the American people had elected George W. Bush as president. At the end of day, the American people in their infinite wisdom had chosen to elect a majority of Republicans to represent their interests in the House and the Senate. At the end of the day, our traditional media outlets were controlled by a small cabal of corporate owners, and the journalists were each and every one scrambling for access to the very politicians whom they should have been holding accountable.

Having observed that grim reality, some of us (like Cindy Sheehan and those in Code Pink) were determined to dig in our heels in the pursuit of the sort of self-righteous hostility that only true political irrelevance can bring.

The rest decided it was time for effective mobilization in the pursuit of winning elections. That meant leaving the fringe behind, and working to speak to Americans about the fundamental issues that affected their everyday lives. It meant the hard work of building infrastructure, finding candidates, creating and pushing effective messages, and moving Overton Windows.

It meant being reality-based rather than ideologically driven. It meant speaking with a clear voice to a broader audience, rather than playing to an increasingly small echo chamber. Above all, it meant using bottom-up democratic organizing tools, media outlets, and fundraising to build a broad coalition of Americans dedicated to creating a brighter future.

That work paid off in 2006 and 2008. It resulted in the election of an African-American named Barack Hussein Obama to the presidency--a result not even the most aspirational leftist ideologue would have imagined possible in the dark days of 2003.

So as you sit helpless and depressed this evening in your living rooms, realizing that the world around you will be no different for all your sign-waving today than it was yesterday, it may behoove you to consider a change in tactics.

First and foremost, you will find it necessary to dissociate yourself from the craziest of your supporters. The ones that make you look bad in front of a national audience.

Unfortunately for you, your craziest and least popular supporters are named Limbaugh, Beck, and O'Reilly. Your strategy of resentment-fueled race-baiting has left you in an electoral cul-de-sac: a regional rump party of Southern racists and aging white exurban holdouts against the tide of modern reality. Starved of political oxygen and unwilling to deal with the political reality that has presented itself to you, your entire movement has been left in a state of crazed panic. Your top spokespeople are the very Pied Pipers leading you off a cliff and doing you the most damage.

Independents are leaving you in droves; Hispanics, once a competitive voting block and by far the fastest growing segment of the U.S. population, are increasingly permanently Democratic; and young people are breaking Democratic by large margins. Unless you change something and fast, you are looking at decades of electoral disaster.

When you're in a hole, stop digging. Ditch Beck, Limbaugh and O'Reilly. Stand up and reject them. It may be painful; your base may abandon you for an electoral cycle or two; but those whose message purports to be "personal responsibility" should understand the concept of short-term pain in exchange for long-term gain.

Until you do, all your tea parties and incipient street protests will amount to the same hill of beans they have for the Left, and you'll wind up sitting at home, depressed and angrier than when you started.

If you truly want success, target your fire not at Obama, but at Glenn Beck. Clean your own house.

Only then will the American People acknowledge you as serious participants in the public debate, and give you a shot at what really matters: governance.

Trust me. I've been there.