When Are White People Going To Stop Waiting For A Handout? 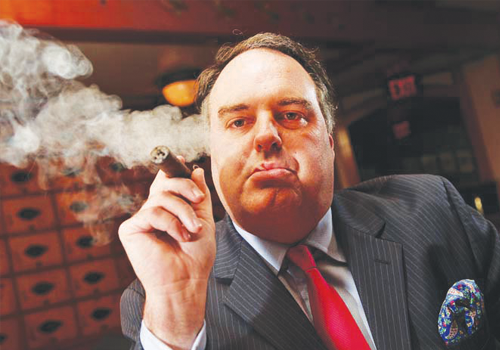 A phrase you will hear every now and then is "when are blacks going to stop waiting for a handout?" I saw it in print last night while reading commentary by Roy Blount Jr. in the Oxford American, whose latest edition is dedicated to race (that means its only about black people in America) this month.

I chuckled a bit after reading that phrase - it wasn't a half an hour earlier that I'd watched a news clip on The Larry King Show that featured a small group of protesters going from house to house in Connecticut to demonstrate in front of the mansions and estates of AIG executives.

If you've been watching the news, reading the newspaper (SUBSCRIBE NOW - THEY NEED THE MONEY), or surfing the web the last two weeks, you can probably understand why I was busy trying out that age-old phrase, one that is often uttered by those who feel that hundreds of years of racial discrimination should be bygones, with a substitution of my own.

When are these white men going to stop waiting for a handout?

The alliteration between "handout" and "bailout" does not escape me. Because that's what it feels like right now - that there is absolutely no difference between the two.

The only people I see on my TV these days, arguing with Congress about how much they think they should make even though their businesses would closed by now without taxpayer assistance, or pouting to cable news analysts about the severity of their company’s situation, are white people. White men in particular. They all seem to be waiting for the government to do something to help them now that they are in trouble.

And I imagine we are about due now for another bombshell announcement in your local newspaper (THE MOST INFORMATION YOU CAN GET FOR THE MONEY) about yet another "paragon of investing virtue" whose financial chicanery will be unveiled as a total fraud. There have been several who have been uncovered in the last few months, including Allan Stanford, the "billionaire" from Texas whose tight lipped exhortations were prominently featured on CNBC on a regular basis. Haven’t seen one black face in the bunch.

This racial stereotype has gotten so bad that the CEO of Dominos Pizza, in a commercial that skewers the whole bailout fiasco, is walking down what is supposed to be a New York City street amid a gang of Dominos delivery guys who are handing out boxes of their "bailout special" pizza to everybody on the street when he pauses to snatch a box back from a pinstriped suited, grey haired, gruff looking white man, yelling "sorry, Mr. Hedge Fund."

If I see one more white guy get accused of a multi-million dollar financial fraud scheme, I'm going to call the Justice Department myself. This racial profiling has simply got to stop.

Now that I think about it, how come they aren't arresting more black Wall Street criminals? Are you telling me that the Asians aren't smart enough to commit these kinds of crimes? That East Indians don't have the resolve and fortitude necessary to carry out these dastardly deeds?

I can be in the kitchen, rinsing off the dishes while the news is on - I don't even have to look up when they start talking about "millions believed lost in the latest Ponzi scheme." I can see the straight hair, the pale skin, the blue suit, along with the affable smile that radiates nothing but goodwill without even looking at the screen.

I predict a new look will be coming into style soon among the rich well-financed. It will consist of rumpled clothes of unknown origin, a buzz cut, wrinkles, and bags under the eyes. The fashion mavens in the Style section of your local newspaper (YOU WILL MISS THEM WHEN THEY ARE GONE - SUBSCRIBE TODAY) will dub it the "I Actually Work For My Money" look. Because we all know that when white men get mad as hell, and decide they aren't going to take it anymore, they just dig in and outwork everybody else so they can regain total world domination by the sweat of their brow, right?

Nope - they revolt. Secede. Take other people's property and rename it as their own. Shoot a few folks if they get in the way.

Which is how you get British colonies that become the United States of America. Or, in its most recent incarnation, the Glen Beck led group of insurgents known as "We Surround Them", along with those infamous "Tea Parties" that are supposed to be taking place all over the country This small but determined fragment of America's white population, along with their favorite token minority self hate monger, Michelle Malkin, have decided that they are tired of their values and their way of life being rejected by the government, and the rest of the public that doesn't agree with them. They are ready to "take back the country."


When, oh when are these white people going to stop waiting for somebody to give them something?

Oh well. I guess I'll be turning on the TV in a few minutes to see yet another privileged group of white men, who insist they they and they alone are entitled to hold the opinions that count on the economy, the government, and the president.

It's only a matter of time before this bunch starts whining about losing its lack of influence.