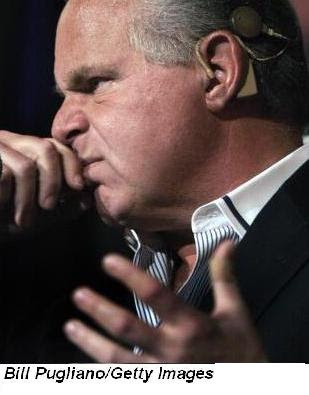 My buddy called me Tuesday afternoon. There was a little anger in his voice.

"Who are these people who listen to Rush Limbaugh? Aren't they the same people who have retirement accounts and stocks and bonds that are way down right now?"

"Dude, the niche market that Limbaugh talks to everyday figure you are the reason why their stocks are down."

"You think I'm kidding - how many times have you heard the cause of the mortgage crisis was Community Reinvestment Act lending? 'Weakness in the moral fiber of minority communities caused stock market collapse' is the kind of shit you might be hearing soon."

My buddy paused for a minute, sighed, then asked, "have you been following this thing with Rush Limbaugh?"

"You know,” he continued, "the thing with the brother who is the RNC chairman - Michael Steele. What the hell is this?" It bothered him to no end that Limbaugh had the last word in this sparring through the media "If Steele is supposed to be the head of the RNC, then isn't he the head of the party? And if he’s the head of the party, then why is he apologizing to Limbaugh? A man doesn't do that."

And just like that, he had come to the crux of the matter. My buddy, who normally could care less about what was going on with the Republican Party, was steaming mad because Steele was not acting the way he thought a real man should, especially when Limbaugh wasn’t officially anything but a radio host.

"Dude," I said, "you’ve lived down here in the South for a long time, but you don't get it yet. You, you look at the president, and you see a well educated, intelligent, thoughtful, organized, motivated black man who has just as much right as anybody else to sit behind the desk in the Oval Office.

But there are quite a few people in this country who see Buckwheat.

A Buckwheat who outsmarted their all-time favorite enemy, the Wicked Witch form Arkansas. To them, Obama is Buckwheat with a haircut and a blue suit on. Do you remember the Little Rascals? Buckwheat was cool with Spanky and the gang so long as they could laugh at him. Could you imagine him trying to take Spanky's place?"

"Then what the hell is Steele there for? Why would he stay in a job like that when he has no power? That brother needs to resign. Just quit."

"The kind of brother you want him to be doesn't get to be the head of the RNC. Although as you were talking, I was wondering how old J.C. Watts would have handled this if he had been in the same position."

For all the square jawed, resolute eyed men you normally associate with the Republican Party, these last two national minority representatives of the GOP do not fit the mold. Steele and Jindal do not have the "take no prisoners", "bulldozer" type of mentality that we often identify with Republican Party leaders. They do not look like the kind of men who are willing to take as much punishment as they dish out.

For that matter, Limbaugh doesn't either, but then again, he's never had to be elected to anything. His value isn't just followers - it is his ability to get people to send millions of dollars to a candidate or a cause, millions that Steele and Jindal can't generate, that comprises the real throne Limbaugh sits on.

"Dude," I continued, "you know how I am about this kind of stuff, since my father is a Republican. I don't take railing against Republicans lightly. But I don't think this is really about the Republican Party. Limbaugh might have dropped out of college, but even he can count – a 131 million people voted in the last election. It was a big turnout - there probably will be a whole lot less people voting in 2012 - but the 13 million or 14 million listeners he has have a problem.

Rush Limbaugh is well on his way to becoming another in a long line of men, like George Wallace, Barry Goldwater, or Eugene McCarthy, who reach an apogee as a social change agent and then harden in place, their stances becoming more anachronistic by the day as the winds of change inevitably blow society in another direction until they turned into caricatures of their former selves.

It hit me later, when I was reading an interview Mr. Limbaugh did last year for the London Telegraph at his radio studio in Florida, that he is to politics what Richard Pryor was to comedy – an entertainer on the edge who is willing go into the political unknown. "That Cracker's Crazy", a play on Pryor's famous comedy album "That Nigger's Crazy" leaped into my head. If you watch Limbaugh's facial expressions while he's speaking, you quickly see that he has the comedian's instinct for satirical irony, a distinction that some of his listening audience is not always so quick to recognize.

When you look at all of the facets of Limbaugh's life that he compresses into the energy powering his three hour radio show everyday – his hearing loss, his multiple marriages, his larger than life father and grandfather, the drug abuse, his fear of being labeled a "racist" – you realize, the same way you did with Richard Pryor, that this is what living on the edge looks like.

'I don't have guests on my show because I don't care what other people think,' he tells me. 'Most guests are boring.' But it's not only others he is bored with, it is also, perhaps, himself. This may be what explains his recklessness, his bravado, his determination to say the unsayable. And perhaps it also explains why he never misses a beat, until you draw him out about himself — how he is difficult to live with, how he cried when his cat died, how, to his surprise, he found it helpful talking to a therapist. Only then does he hesitate.


Excerpt from the Telegraph.co.uk

Limbaugh seems to be the cat's meow right now, but he is as vulnerable as these men were. One of the worst things you can do is turn a friend into an enemy, because they know all your weak spots and all your intimate secrets. And when Limbaugh's political friends begin to realize that the Obama agenda is to actively continue to expand the electorate in the hopes of capturing even more congressional seats for the Democrats, while all they have is "1 X 1 = 1", the GOP hatchet men will be out for the frat boy with a vengeance as they try to keep the party from dying.

If Steele goes, at least he can say he was there. But if he stays on, he can shelve the hip hop initiative. Cancel the urban outreach. Just quit throwing good money after bad. Because the image that is playing in the minds of many black American men right now is not a good one.