Is There Anything Good Going On These Days? 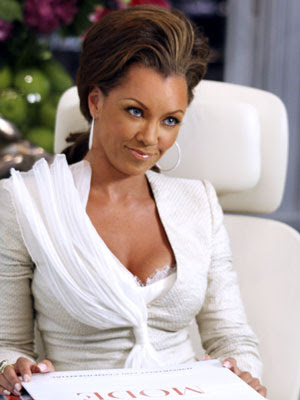 Yesterday, I was feeling a little rundown after a long week, so instead of getting online, or reading something, I sat down in the den and pushed back on the arms of the recliner to raise my legs. The TV was already on, so I figured I'd watch it for a few minutes until I nodded off. The show turned out to be Ugly Betty, a satire aimed at the fashion magazine publishing industry.

I’d forgotten Vanessa Williams was on the show - just when I thought I was going to fade out, she hit the screen. You can never go wrong watching Vanessa. But the program itself became more compelling than Ms. Williams blue green eyes as I realized that the program was incorporating current events into its storyline. When they showed the editor and publisher of Mode magazine, the fictional publication the show revolves around, in front of a New York legislative body, it made me think of all the recent congressional hearings where Wall Street and Detroit executives had recently been grilled.

Mode magazine was struggling, like many companies in the real world, and its executives were making a personal plea for $75 million in bailout funds. The company's executives emphasized that they'd come in on the subway to the hearings. The show segued to the title character, Betty Suarez, who was trying to figure out how to save the family home.

It wasn't until the second or third set of commercials came on that I realized how out of touch I was with the world of broadcast TV. The ads were all keying on the economy, layoffs, cutbacks, downsizing, and the corresponding change in spending habits of the buying public.

I don't know if this is typical of all the prime time shows and advertising these days, but with the constant barrage of negative images, I was more awake and more concerned about the economy by the end of the show than I'd been when I sat down.

Is there anything good going on these days?

As bad as this economic downturn is, I think there are several positive things that are taking place right now.

We are connecting to other people in intimate, heartfelt ways that some of us have frankly ignored in times of plenty. The need to contact everybody in your network if you’ve been laid off or downsized oftentimes reopens lines of communication with people you may not have spoken to in years.

We are leaning on each other emotional, spiritually and financially, which has altered how we make decisions about things. This group input is resulting in less rash or unnecessary purchases that we have often rationalized are "essential" items when left to our own devices in times of plenty.

We are all learning to really appreciate what we have, rather than covet the things we don't have.

At the end of this episode of Ugly Betty, the Suarez family got the money they needed to save their home. The owner of the publishing company, after being turned down for a bailout, decided to put up his own assets (a novel concept!) to try to save the business his father founded.

Hell, even Vanessa Williams' character decided to kick in what she could.

We’re all in this together. Even our fictitious TV personalities are joining in.

We in real life aren’t going to get a fairy tale ending, but the outcome of all of this, down the road, will be a positive one.