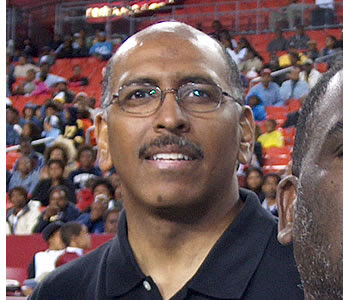 When I read the other day that Michael Steele was the person credited with inventing the phrase "Drill, Baby, Drill", something in the article about hip hop made a connection somewhere deep in my memory banks.

"Drill, Baby, Drill", the phrase so enthusiastically chanted at Republican gatherings after Sarah Palin came on the scene, was an adaptation of "dip, baby dip", a constant refrain in the song Tootsee Roll by the rap group 69 Boyz. There is no anthropological proof to back up my claim - the many Wicked Wednesdays I whiled away in nightclubs years ago are all the evidence I need to satisfy me about my hypothesis.

I guess Michael Steele wasn't kidding about liking hip hop after all. Now that I think about it, he looks like the kind of dude who fell through the club after a political rally, his tie still around his neck, bobbing his head as he tried to fit in with the Downtown Browns back in the day who were sporting their after work uniform - multicolored Jhane Barnes shirts and designer cologne.

It was the two images the Republican chant evoked - square jawed, tow headed white men chanting about domestic oil drilling to the same tempo that square jawed, freshly barbered black men used to chant at nightclubs across the country years ago as they two stepped in time to the tempo of their dance partner's rear end - these two images, twining themselves around each other, have amused me to no end the last few days.

I was reading a post on the blog Average Bro the other day about how Average Bro was rethinking his attitude to Michael Steele when I understood this feeling of lost kinship I'd been having lately, because I am tired of laughing at the brother. This is no longer funny. At the end of the day, Steele is still black, just like Clarence Thomas and Condoleeza Rice are still black.

Right now, I feel the same way about Mr. Steele that I do about a football team that gets behind three touchdowns in the first quarter. Even if the losing team is playing the Falcons, my home team, I have to pull for their opponent when the score is that bad – otherwise the game is no longer interesting.

So Michael Steele, while your fellow Republicans are hemming, hawing, twitching and resorting to doublespeak in order to accept and reject you in the same breath during all the political gabfest shows this morning, I will start cheering for you whole heartedly – not for your policies, or any reverence for the office that you hold within the GOP, but because I hate to see black men of any political stripe (other than Alan Keyes) get humiliated day after day on national TV.