Can The President Take A Hint From Leno? 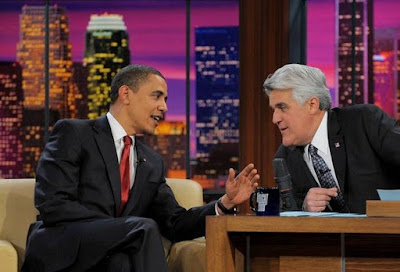 It's still a little hard to wrap my mind around President Obama appearing on The Tonight Show. Jay Leno has become almost as much a Tonight Show institution as Johnny Carson used to be, in spite of all the competition from the late night shows on cable. But Leno's still a comedian.

Luckily, President Obama hasn't developed the wooden version of presidential cheeriness yet, that forced smile that takes away the natural plasticity in their faces, a look that became a caricature of itself in almost every modern commander-in-chief except the first George Bush.

The audience had been searched. The Tonight Show band were all wearing suits. Jay Leno was noticeably excited but contained in his monologue. You really couldn't call this an interview, with the president getting plenty of room to deliver his pre-written jokes, but it was something less than a pure infomercial. It wasn't until about a third of the way through the president's visit that Leno's eyebrows began to inch skyward in disbelief, the way they normally do when his guests give him half answers.

You got the sense from watching this that Leno reluctantly went to the softball questions about the Obama's dog and Air Force One to wrap up the evening. He looked as if he could have asked questions about AIG until six in the morning.

The one thing this visit pointed out to me is a need for someone - the president, the treasury secretary, or some high ranking official - to go ahead and do a podcast or a webinar that actually explains step by step what kind of mess we are in, complete with a link to a glossary or on screen definitions so they can use all the correct names and terminology involved. Telling us that AIG's Financial Products division's foray into manufacturing derivatives was like "putting a hedge fund on top of an insurance company" may have been the best President Obama could do, but that was the kind of buzz word filled answer that leaves most listeners as clueless as ever. It was about as effective as explaining sex to your kids by using "the bird and the bees" analogy.

A presentation on AIG, how it works, and why the government feels it so important to the world economy may end up being an hour long - maybe two - but I think we deserve better pronouncements from our government officials than using half baked analogies to describe one obscure product nobody understands by comparing it to an obscure industry most people don’t understand.

For those of you who are also unsatisfied with all the eighth grade explanations about this, I've got a couple of links you need to check out.

Recipe for Disaster: The Formula That Killed Wall Street

If you're an investor, you have a choice these days: You can either lend directly to borrowers or sell investors credit default swaps, insurance against those same borrowers defaulting. Either way, you get a regular income stream—interest payments or insurance payments—and either way, if the borrower defaults, you lose a lot of money. The returns on both strategies are nearly identical, but because an unlimited number of credit default swaps can be sold against each borrower, the supply of swaps isn't constrained the way the supply of bonds is, so the CDS market managed to grow extremely rapidly. Though credit default swaps were relatively new when Li's paper came out, they soon became a bigger and more liquid market than the bonds on which they were based.

When the price of a credit default swap goes up, that indicates that default risk has risen. Li's breakthrough was that instead of waiting to assemble enough historical data about actual defaults, which are rare in the real world, he used historical prices from the CDS market. It's hard to build a historical model to predict Alice's or Britney's behavior, but anybody could see whether the price of credit default swaps on Britney tended to move in the same direction as that on Alice. If it did, then there was a strong correlation between Alice's and Britney's default risks, as priced by the market. Li wrote a model that used price rather than real-world default data as a shortcut (making an implicit assumption that financial markets in general, and CDS markets in particular, can price default risk correctly).

It was a brilliant simplification of an intractable problem. And Li didn't just radically dumb down the difficulty of working out correlations; he decided not to even bother trying to map and calculate all the nearly infinite relationships between the various loans that made up a pool. What happens when the number of pool members increases or when you mix negative correlations with positive ones? Never mind all that, he said. The only thing that matters is the final correlation number—one clean, simple, all-sufficient figure that sums up everything.

The effect on the securitization market was electric. Armed with Li's formula, Wall Street's quants saw a new world of possibilities. And the first thing they did was start creating a huge number of brand-new triple-A securities. Using Li's copula approach meant that ratings agencies like Moody's—or anybody wanting to model the risk of a tranche—no longer needed to puzzle over the underlying securities. All they needed was that correlation number, and out would come a rating telling them how safe or risky the tranche was.
As a result, just about anything could be bundled and turned into a triple-A bond—corporate bonds, bank loans, mortgage-backed securities, whatever you liked. The consequent pools were often known as collateralized debt obligations, or CDOs. You could tranche that pool and create a triple-A security even if none of the components were themselves triple-A. You could even take lower-rated tranches of other CDOs, put them in a pool, and tranche them—an instrument known as a CDO-squared, which at that point was so far removed from any actual underlying bond or loan or mortgage that no one really had a clue what it included. But it didn't matter. All you needed was Li's copula function.

To put this in perspective, the entire U.S. housing mortgage debt is 11 trillion dollars.

Now that you've got a better foundation to understand WHAT happened, reading this next excerpt, you might begin to feel like you are standing in the shoes of your government officials, with a clearer picture of why they are scared to death of doing anything to keep the AIG crew away from their desks.

The excerpt below is from AIG itself.

There are also substantial risks related to the hedging of AIGFP's various books. Although we view the large-market risk books at AIGFP as generally well hedged, the hedging is dynamic - that is, it must be monitored and adjusted continuously. To the extent that AIGFP were to lose traders who currently oversee complicated though familiar positions and know how to hedge the book, gaps in hedging could result in significant losses.

This is driven to some extent by the size of the portfolios. In the interest rate book, for example, a move in market interest rates of just one basis point - that is 0.01% or one-100th of one percent - could result in a change in value of $700 million dollars if the book were not hedged. It has virtually no impact on the hedged book. There are similar exposures in the foreign exchange, commodities and equity derivatives books.

AIGFP's books also contain a significant number of complex - so-called bespoke - transactions that are difficult to understand and manage. This is one reason replacing key traders and risk managers would not be practical on a large scale. Personal knowledge of the trades and the unique systems at AIGFP will be critical to an effective unwind of AIGFP's businesses and portfolios.

In this current environment, any perceived disruption in AIGFP's ability to conduct business, such as one that would result from the departure of a number of key employees, could also cause parties to limit or cease trading with AIGFP. Obviously, this would adversely affect its ability to continue to cost-effectively hedge its positions.


That pesky devil, it seems, is still always in the details. In all fairness, though, I fall asleep fast enough already while watching The Tonight Show - 11;30 at night is not the time to be introducing these kinds of concepts.

Hopefully, the president took a hint from Leno, a certified car guy who loves domestic cars, who didn't ask ONE question about the GM or Chrylser situations. AIG will be here to stay, Mr. President, until the answers we get about the how and the why behind this never-ending bailout starts matching up with the urgency and the action you're taking with our money credit.