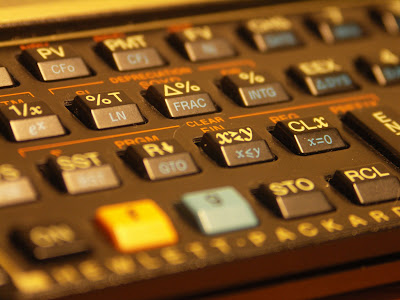 My brother is the most parsimonious person I know.

He bought his first house a couple of years ago. The purchase process almost wore me out, even though I'm in the mortgage business, and it wasn't my house. I believe he looked at every house for sale in two zip codes in northwest Atlanta. After traipsing around the less decrepit parts of Atlanta's forgotten northwest corridor for a few months, I wondered - why is he going through all this? Why not just get a house in the suburbs, like everybody else, that is newer and has the kind of neighbors who hang around the streets in the morning, waiting for their kids school bus, instead of the kind of neighbors who hang around the streets at night, waiting for some shit to go down?

He finally found a house that he liked that he figured I would like too. Actually, I was very impressed with his find, a four bedroom, two bathroom ranch that was almost as big as the house we grew up in. It had hardwood floors, and an open floorplan, and an elevation that gave him a nice view of the gently curving tree lined street off of the porch. It was a brand new house that had never been lived in. Now THIS was worth all the months of riding around and looking at rattraps. It looked like it was going to be his new address.

Until he found out the price.

H called me, telling me that it wasn't going to work. The payment, he said, was higher than he wanted it to be. Then he said he had done a little more digging, and had found a house nearby with the same floorplan, by the same builder, that was in foreclosure, right around the corner. It needed some work, but it was almost thirty thousand dollars less. I couldn't argue with his logic, but as I walked through the foreclosure, I tried to picture my brother, who owned two screwdrivers and a pair of pliers, doing handyman type work to fix the place up.

I lobbied like hell to get him to reconsider the first place, that was sweet smelling and pristine and move-in ready, especially when they dropped the price. The two hundred dollars a month difference, I pointed out, would be the same as the thousands of dollars he would have to spend to paint and repair the foreclosure.

The second house fell through. It took a couple more tries before he finally found the place he owns now, another foreclosure that wasn’t quite as neglected as the first one. More importantly to him, the price meant he could pay his principal, interest, taxes and insurance within the budget he’d outlined. The original owners, who paid twice as much as he did two years prior to his closing, had not made it twelve months.

My father asked me why I wouldn’t do the loan for him. “Dad,” I said, “we rob people here. He will get a better deal somewhere else.” It was at the end of the that sentence that I realized how true that statement was – that my company “robbed” people with enormous house fees, and extraneous junk fees, and the ever present jimmying with the yield spread premium that often resulted in a borrower showing up at the table to find a rate higher than what he was expecting.

I could control the jimmying, but there was no way around the two thousand dollars in house and junk fees. It was a bad feeling, to be stuck in an office that was so wedded to the mortgage broker hokey pokey that I couldn’t even do a reasonably priced loan for my own brother.

There are many of the same houses that he looked at two years ago in the area that are still for sale. There are houses on his street that have been vacant for some time, houses that friends of mine, upon visiting him, have immediately tried to buy as investment properties, but to no avail. The bankers will not budge one inch, leaving the investors no recourse but to stay on the sidelines until the prices come down to a level that will allow them to get 70% loan to value loans.

I've helped him paint some of the rooms. Clear brush out of the yard. Cut down small trees. And he has had to get the air conditioning and the heat reconditioned. There are things yet to be done. He was right, about keeping his payment where he wanted it, and about what he figured he could and could not live without.

What is the new homeowner relief package going to do for him? He needs relief too – not directly, because he can pay his bills, but indirectly, because he will never be able to sell his house if the vacant properties in his neighborhood aren’t purchased, fixed up, and lived in. And all of this is only four miles from downtown Atlanta.

These are the kind of stories that make you swear you wished you’d never learned how to run a loan application through Desktop Underwriter, that you’d never seen a mortgage rate sheet that showed you how to make three points on the back end of a loan, that you didn’t know how to get that sound in your voice that made people give you their social security numbers over the phone.

If President Obama’s foreclosure prevention plan does HALF of what he says it will, it will be a resounding success. And if it can pull off half of the other half, maybe my brother can get him some new neighbors.