Wall Street And The Art Of The Big Con 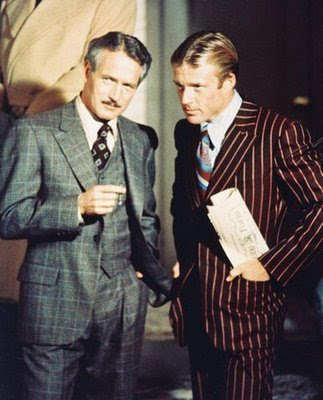 The movie The Sting, with Robert Redford and Paul Newman, was one of my favorite films growing up. I didn’t really know much about Redford or Newman or con men or gambling, but I was awed anyway by every turn in the convoluted plot, by every piece of the elaborate plan Paul Newman's character devised to rob a mob banker of his money.

Their performances won the movie an Oscar for Best Picture.

Today, we will have a similar production take place on Capitol Hill. Rich men who run our nation's largest banking institutions will leave their private jets in their hangers for the day and get on trains and commercial flights to commute to Washington, as if they are ordinary Americans.

They will be ushered in front of a committee of Congress. Camera crews from all the major news networks will jockey for position. Lights will shine. And the committee members will peer over their glasses, frown, glare, and explode in righteous anger at these bank executives for half a day or so.

And after the lights go off, when the executives are on their way home and the members of the committee are through answering questions from political reporters, you and the rest of the American citizenry will be in exactly the same position the mob banker in The Sting was - wondering what the hell happened.

You won't know anymore by tonight than you do right now, because the entire setup is just like the make believe gambling parlor in movie, designed to give you the impression that what you are seeing and hearing is the real deal.

You won't come any closer to knowing, for instance, what it is that is so God awful in the books of these banks that has our government racing to hand them billions upon billions of dollars at the blink of an eye.

The anecdote President Obama used on Monday night to explain in a thumbnail sketch what the banking crisis was all about - "what got us into this mess initially were banks taking exorbitant, wild risks with other people's monies based on shaky assets and because of the enormous leverage, where they had one dollar's worth of assets and they were betting thirty dollars on that one dollar, what we had was a crisis in the financial system" - pretty much laid it all right out there in front of everybody, except he forgot to tell you how many trillions of dollars worth of assets these banks wagered.

You won't be getting that number today either.

According to Ian Welsh, over at FireDogLake:

Now you should understand why there is such antipathy towards spending any real time, money, and energy on the educational system here in the United States. The entire gambling industry relies on the fact that most of us don't understand probability. And the men who will gather at Capitol Hill today to put on their show are counting on our ignorance to see them through.

The mob banker in The Sting ended up losing half a million dollars because he had a little success at first based on inside information, which is pretty much the same thing that happened to the nation's banks when they first started fooling around with derivatives. So the mob banker started making bigger and bigger bets. Robert Redford's character sucked him in gently, slowly ratcheting up the level of the mob banker's trust as he fed him tips that always won. By the time Redford and Newman were ready for their big score, the mob banker was hooked on Redford's system. He couldn't live without it, so he literally bet the bank.

The men whose faces you will see on your TV's all day today, or on the news tonight, got hooked on the same kind of sure thing.

I've seen some numbers bandied about the internet lately that attempt to "guestimate" how big the gap is between our nation's banking liabilities and the actual value of our nation's banking assets. I'm not going to print them here because they are likely to be pure speculation. The actual numbers, for all practical purposes, aren't important anyway - whether it's a twenty dollar difference or a twenty trillion dollar difference between what they have and what they owe, if it's more than they've got, then it's more than they've got.

So even though what you see and hear today will have very little relationship to the truth about the bank bailout, and even though the men testifying really represent the failings of an industry-wide corporate culture, you need to pull for these rich bankers this afternoon. You need to hope they get those investors who watch CNN International from around the world to believe enough to place their next bet at the Wall Street window.

Irony of ironies - just like in the movie, you end up pulling for the bad guys.