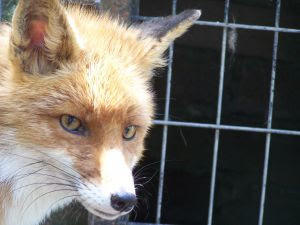 President Obama will have his first test this week. He doesn't like the executive compensation restrictions inserted into the stimulus bill last week by the Democrat Chris Dodd and his cohorts in the Senate, but he's going to have to sign it anyway. I hope he doesn't waste any time this week barking into a microphone in the middle of a cornfield somewhere about why we need to be worried about paying Wall Street's foxes enough money to guard the public's hen house.

The public wants a little blood. They want to see some sort of shared suffering. They really want to know - what is so god awful important about this particular fraternity of self-important white men that not one hair on the head of their financial chinny chin chins can possibly be exposed to harm? That their earning power cannot possibly be reduced by one dollar? That their personal lives cannot possibly be allowed to go into a tailspin, the way it has for millions of other Americans who were also employed by insolvent firms, but in other industries, industries that didn't get bailed out?

There is no crime in being wrong. Some of the greatest innovations in our history came from men who were wrong way more often than they were right. But there is a crime, in this case, a crime that seems to go against the very laws of nature itself, to be so hideously, horribly wrong and suffer no consequences that come even close to matching the proportion of the mistakes that were made.

This inequity is where President Obama needs to start learning how to put the "bully" in his "bully pulpit" and use it often for items that benefit the public at large. If the rest of us can suck it up and be good patriots, why can't the guys on Wall Street do the same? Are they only into being "Americans for America" when money is involved? Is their sense of honor and duty to preserving a marketplace that has made them rich based upon some sort of conditional quid pro quo, the way it was for the Benedict Arnolds of the world?

There is no moral high ground in this situation. We've all lived high on the credit hog as a nation for the last eighty years, so blaming where we are on any one president who served in the last thirty years is illogical. We believe in credit more than we believe in freedom. And for some of us, who have no other way to conceptualize life, credit is freedom - the freedom to enjoy what we want today.

The White House has been making overtures for days that these new executive restrictions have gone too far, and will create a "brain drain" on these firms just when they need these people the most, because they will leave for foreign banks and hedge funds.

I know somebody in the White House must subscribe to Forbes and Fortune. Our nation's leading business magazines don't print an issue these days that doesn't lament the loss of these exact same jobs. What I'd like to know, from those who do executive searches for financial services industries, is whether or not they are seeing any increased demand for candidates. Come to think of it, my old neighbor is a recruiter for financial services candidates with quantitative backgrounds - maybe I'll give her a call this afternoon.

There just aren't that many jobs out there in any sector. And all of these people that our bankers deem to be such key employees all came up the same way - up through the ranks. Which means there are second, third, and fourth in command employees in every trading department in the company who are thoroughly familiar with the proprietary trading strategies and positions their firms have, employees who are eager for a chance to prove themselves, even with the potential for drastically reduced bonuses, as the head of a major trading desk.

If President Obama is as good at reading the public's sentiment as his people says he is, and if he is as smart as his educational background and his meteoric political career suggest, he will understand instinctively why he needs to reverse his position on this issue. If he thought he got hit hard when the Daschle tax problem came to light, making any overtures to soften the language in this provision will make him wish Daschle was back in front of the cameras.

And if the latest internet scuttlebutt on the Bernie Madoff scandal - that Wall Street's execs knew what he was doing but kept their mouths shut - gathers any steam, they will wish no one knew what they looked like.

Our banks have no money left in them. So why should any representative of the people even waste any time considering paying a premium to retain "talent" to watch what are essentially empty savings deposit boxes?

It makes absolutely no sense to worry about the welfare of the fox when he is already inside the hen house, his belly full from the hens he has already eaten, his eyes glazed over as more hens are added to replace the ones he’s already gorged on.

These foxes will be just fine if they miss a few meals.