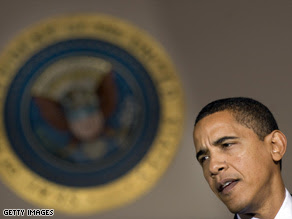 By the time you see the news tonight, President Obama's address to Wall Street this morning will have been analyzed, sifted through, taken apart and put back together again - by the same brilliant members of the punditocracy who interpreted what the last president really meant.

The real political narrative is wider and broader than anything these columnists want to deal with - their editorial and aesthetic constraints force them to deliberately focus in on the three soundbites that can be shoehorned into a thirty second news clip.

But there is more in this speech announcing new bailout rules than a few buzzwords.

This speech is the beginning of the unveiling of a new attitude from President Obama, a more forceful, more authoritarian one we are not used to seeing.

"For top executives to award themselves these kinds of compensation packages in the midst of this economic crisis is not only in bad taste - it's a bad strategy - and I will not tolerate it as President."

As much as I hated hearing the phrase "I will not tolerate this" growing up, I can appreciate hearing it from the president in the context of the Wall Street bailout bonus bonanza.

For as much money as our Wall Street friends make, they ought to have thick enough hides to take it.

I took it for free back when I was growing up.

The current phrase of the day - "this is unacceptable" - is fairly innocuous, akin to someone snorting, or sucking their teeth in displeasure, when things go haywire. "I will not tolerate this" implies, no, promises that severe disciplinary action will be on the way like a firetruck to a four alarm fire if the intolerable behavior continues.

Obama does not have the physical stature of the ex-farm boy turned college graduate type of fathers I grew up around, but the timbre of his voice sounded ominous enough to bring back memories.

For all the talk about Obama’s rhetorical gifts, it is his ability to state starkly, in a simple, direct, and unwavering voice, exactly what he means without any unnecessay adornment.

"…in order to restore trust, we've got to make certain that taxpayer funds are not subsidizing excessive compensation packages on Wall Street."

This is the same thing he said last week.

Guess what - if you are a C-level exec who works on Wall Street, and you work at AIG, Citigroup, or Bank America, you will get tired of hearing these words, the same way I got tired of hearing "I will not tolerate this" back in my youth.

Take it from me, guys, the best way to combat this is to do what the president asks. You'l have less stress. You’ll live longer.

The thing that is really amazing to me, especially since I live with a lawyer, is the level of specificity President Obama gets to in parts of his speech.

"Companies receiving federal aid are going to have to disclose publicly all the perks and luxuries bestowed upon senior executives and provide an explanation to the taxpayers and to shareholders as to why these expenses are justified.

And we're putting a stop to these kinds of massive severance packages we've all read about with disgust; we're taking the air out of the golden parachute."

It sounds to me like the most wired president in American history has somebody – likely very many somebodies – taking the temperature of the internet daily, if not hourly, because this mirrors what I've been reading on all the political blogs for the last few weeks.

I’m obviously biased here, but it seems like a smart move to get beyond the one note ninnies who are wasting space in many of our nation’s top newspapers, masquerading as public thinkers, and go direct to the blogosphere, the place where real public opinion is cultivated these days.

The phrases that appealed to me the most were these:

"The economic crisis we face is unlike any we've seen in our lifetime. It's a crisis of falling confidence and rising debt. Of widely distributed risk and narrowly concentrated reward."

You will see well dressed, red faced men on your TV for the rest of the week, sputtering their denials, listing their accomplishments, and telling you how unfair all of this is. Many of them will look like they want to jump out of a window.

Oh, if only the windows of modern high rise buildings were designed to be opened...

Many of them will go home today just like the rest of America has been lately - tired, disgusted, scared, and afraid to look at the mail. They will lay awake tonight like the rest of America has been - uncertain of how they are going to afford to make it from month to month, in doubt about their children's futures, speculating about the distinct possibility that they may not have the retirement years they have been planning on.

When they wake up, they will feel a lot like the thousands of people they have laid off from their own firms with little or no warning in the last year. They will feel the same way their ex-employees did, like their whole world has been changed literally overnight.

For President Obama to state squarely what the real deal is, that the American public has been played for patsies by fake capitalist wannabes who think we have forgotten how to do basic math, is practically heroic in this era of doubletalk and message speak.

Instead of President Obama, I may start calling him "President Relentless" - because I get the feeling he will keep beating this drum until Wall Street learns to dance to his tune.