A Nation Of Outsiders 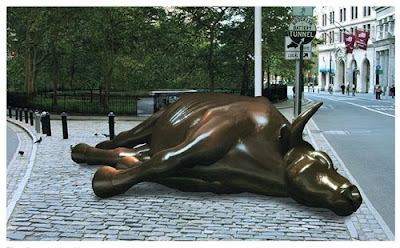 I was talking to my buddy on the phone yesterday, just a casual conversation about the perils of joining Facebook, when I said "hey man, I've been meaning to tell you something."

"You know that wish list you have of all the stuff you'd like to buy because you always wanted it?"

"Uh, yeeeah," my buddy answered, wondering what list I was referring to, and why it was important now.

"You need to take that list," I continued, "fold it up, and stick it in a desk drawer somewhere. This thing is badder than it looks. Brotherman, you need to be saving some money."

There is nothing more exasperating to a person who feels financially secure than to have someone begin to lecture them on their finances - particularly when the someone giving them advice has less money than they do. But these people didn't get where they were by ignoring advice, but by sifting through it and selecting the nuggets of wisdom from among the bushels of bull. I could almost hear my buddy lean forward at his desk. "So what indicators are you seeing that tell you this thing is so bad?"

I tried to think of the ones we all use - the Dow, the unemployment numbers, new home sales - before finally settling on interest rates. "If anything else happens, the Fed has nowhere to go. Interest rates can't get any lower unless they go negative."

My buddy exhaled a bit. I could see his mind working - was that it? "So Greenspan screwed us."

"Dude, it sounds simple to blame Greenspan, but he had to work with the hand he was dealt. We've been operating on credit for decades. Ever since-"

"Gold," my buddy interjected. "You know, I was just thinking about that last night - why did we ever get off the gold standard?"

"That's kind of water over the dam. Credit isn't bad. It's the way it's been used lately that is the real problem." My buddy was too calm now - I could hear his regular, easy breaths, could see him looking out the window of his high rise office, wondering why I was wasting his time with this when we could be talking about something more salacious.

"You know," I said, "I've been writing a lot about this bank bailout stuff this week, which means I've had to root around the internet to do some research on what was happening. The real problem is the amount of liabilities the major banks owe versus the amount they have in assets. It will take a few trillion to fill the hole."

I had his attention again - fully, this time. I could hear him sigh a few times. "So I guess these guys have really fucked this up."

We went on for awhile about how this could have happened, with my buddy wondering out loud why no one could see this coming. I wasn't until this morning, while reading Eugene Robinson's column in the Washington Post, that I understood some of my buddy's frustration when I came across the phrase "a nation of outsiders".

Being "in the know" is a hallmark of having arrived in America. Getting useful information before everybody else confers status as well as power. Sometimes it is as simple as understanding what the information means before everyone else figures it out. And for quite awhile in this country, an intimate understanding of the world of finance often meant those "in the know" could act faster on public information, because they were the only ones who had any real interest in deciphering it.

We're all "in the know" today. The guy spraying around your home for bugs knows more about how the 10 year bond prices affect mortgage financing than he does about insect nervous systems. The guy who gets your car running again at the repair shop comprehends the fundamental theory behind collateralized debt obligations the same way he understands the fluid dynamics in your car's hydraulic systems.

Whether or not we will remain a nation of outsiders, willing to accept any half-assed idea, whether its from President Obama, or Tim Geithner, or Congress, to help get the nation out of this economic nightmare, or fight to become a nation of insiders, who demand that we get to see exactly how they make the sausage from now on, is up to us.