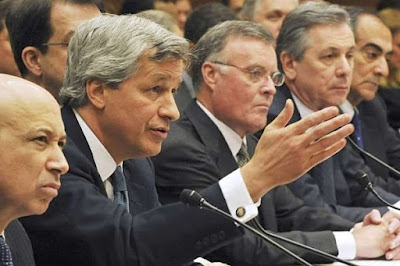 The soundbite is the currency of TV news, the primary political information source for most of America - simple, nice, neat, easy to pronounce phrases that an announcer can whip off after the guy behind the camera starts waving that they have ten seconds left until the commercial break.

But until the majority of the public gets tired of wallowing in their stupidity – and if it offends you because I am saying this, yes I mean you - it will remain the currency that counts, because we don't demand any better.

I’ll use Massachusetts Representative Michael Capuano as an example of what happens when you substitute soundbites for the real thing. Capuano went on a tear this afternoon during the bailed out bank hearings today on Capitol Hill.

If you’ve saw Capuano on the news last night, or read about what he had to say in today's paper, you probably got this brief clip:

"You come to us today on your bicycles, after buying Girl Scout cookies and helping out Mother Teresa, telling us: 'We're sorry. We won't do it again,' "said Rep. Michael Capuano (D., Mass.). "America doesn't trust you anymore."

"You come to us today on your bicycles after buying Girl Scout cookies and helping out Mother Theresa and telling us, 'We're sorry, we didn't mean it, we won't do it again, trust us.' Well, I have some people in my constituency that actually robbed some of your banks and they say the same thing."

But it just so happened that I saw Representative Capuano speak live during the hearings, and listened to his remarks in their entirety. No soundbite in the world can begin to do justice to what he had to say to the panel of bankers.

Capuano's opening questions really served as a rhetorical introduction of sorts for the five minute statement he made, a monologue that married the emotions on Main Street with a solid understanding of Wall Street accounting chicanery to perfectly articulate the disgust so many Americans have right now with the entire industry.

I've transcribed the ubiquitous Youtube video of his performance below:

REP. CAPUANO
"I've got a couple of more detailed questions. Of all of you, just by a show of hands, how many of your banks, either directly or indirectly, and by indirectly, I mean by loaning money to people you knew would be using this money to invest in credit default swaps, how many of you engaged in that?

None of you engaged in that?"

UNIDENTIFIED BANK CEO
"We engaged in credit default swaps - but, uh, when you asking the question 'are we lending money for them to do that - I'd have to come back to you with specifics - I cannot tell you."

REP. CAPUANO
"We can fill that in later. How many of you, um, how many of your banks had or currently have Special Investment Vehicles - those off the books, somehow unregulated subsidiaries of the bank, or sister corporations?

UNIDENTIFIED BANK CEO
"We have SPV's"

REP. CAPUANO
"So, basically all or most of you engaged in all or at least some of the activities that actually created this crisis in my opinion.

How can possibly any regulated bank have something on its books that's totally unregulated that for all intents and purposes does the same thing the bank does? That's for your lawyers to answer, and I my hope is that you will be answering those questions in court someday - we'll find out later on.

But basically, you come to us today, on your bicycles, after buying Girl Scout cookies, and helping out Mother Teresa, telling us 'we’re sorry, we didn’t mean it, we won't do it again. Trust us.'

Well, I have some people in my constituency that actually robbed some of your banks, and they say the same thing. 'They’re sorry, they didn't mean it, they won't do it again. Just let 'em out.'

Do you understand that this is a little difficult for my constituents to take, that you 'learned your lesson?' And it’s all the same people doing this - the same people who created SIV's, who created CDO's, who created credit default swaps - that never existed a few years ago - you created them, you created the mess we’re in, and you're not the only ones - you just happen to be the ones here today. I can’t wait to get the credit rating agencies here some day again.

And now you’re saying 'sorry, trust us, and by the way, we don't even want the money.'

Interesting, no one has ever come to me and said, 'you must take billions of dollars.'

And as I heard earlier, you have an option. Basically, they said 'you have to capitalize better, because we no longer trust your books.' You can either take this money and do it, or you can do it on your own – if you don't want the money, you can give it back, you just have to come up with the capital. As I understand it, and if you can't do it, I think many of us would be happy to change that law.

You have to understand, I don't really have a question, but I was told I can use the five minutes, cause the questions I have, you've answered them, and you're going to continue to answer them, and that's all well and good.

The problem I have is that honestly, none of us - America doesn’t trust you anymore.

I for one, between myself and my various campaigns and my own personal business stuff, I get a lot of money to put in banks. I don't have one single penny in any of your banks.

Because I don't want my money put into CDO's and credit default swaps and making humongous bonuses - me personally. Until that changes, none of us really believe - I don't believe - anything will change.

Until you change the people who brought you into SIV's - who was the brilliant person who came and said 'let’s do credit default swaps?'

Tell me you fired him.

Get out of CDO's. Start loaning the money that we gave you. Get it on the street. And don't say 'oh well, we’re not using that money for bonuses.' Come on! Money's all of a sudden not fungible in your entities. It’s fungible everywhere else, but not in your entity.

Get our money out on the street. And if you don't want to give it back, don’t come here and tell me that you can't. Yes you can. As long as you live up to the requirements of the program you're in now.

In the new world that you created and we have to clean up."

Soundbites have made their own contribution to this mess, by allowing otherwise sane adults to believe that they can remain fully informed about the world around them by watching a thirty minute or an hour long program on TV that is made up of dozens of these little news chicklets.