California Mayor "Unaware of Racial Sterotype That Blacks Like Watermelon" 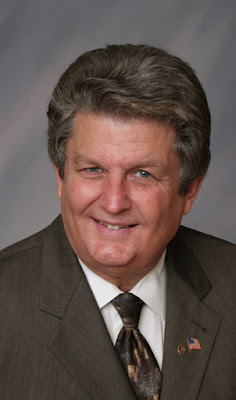 When the mayor of Los Alamitos claimed that "he wasn't aware of the racial stereotype that blacks like watermelon" after sending a black person an email postcard that depicted the White House surrounded by watermelon fields, with the caption "no Easter egg hunt this year", there was a collective eye roll among black people across America.

In situations like this, you can count on it - the good old "I had absolutely no idea" explanation, which has to rank right up there with "the dog ate my homework" as one of the absolute worst excuses of all time.

I guess I'll have to bring up Eric Holder once again, because it seems that his statement becomes more apropos day by day. This is the kind of cowardice Holder is talking about, when a grown man who sends out an email that clearly uses a derogatory racial stereotype is not brave enough to admit what he was really thinking when he pushed the SEND button.

The thing Holder didn't describe in any detail is why we are cowards when it comes to having honest and open dialogue about race. Can you imagine, if this mayor had simply had a conversation with the recipient of the email, what would have been said?

If this mayor talks about why he is uncomfortable having a black man as the president of the United States, I imagine he will run out of verifiable empirical evidence that shows why black people are inferior human beings in about half a second, if not less. One of the reasons why we are cowards about race is because most of us don't like to say things that make us look stupid.

So the Los Alamitos mayor ends up sounding like your four year old when you catch them red-handed.

Maybe we should take another tack. Try something different the next time something like this happens. Instead of shaming these people into hiding, where they are likely to seek out like minded people for comfort as they lick their wounds, why not give them an outrage free eight minutes and a microphone? Why not let him tell us the mechanics behind the decision making process that goes into putting something like this on your "THINGS TO DO TODAY" list?

You might not be the mayor of Los Alamitos, but if you liked the postcard, or were thinking of sending one to your black friends, take a minute while you're here and let us know why. Eight words, eight sentences, eight paragraphs - I would just like to know.

IGNORANCE. It is one thing to say "I did not know."

DISREGARD. It is another thing to say "I know, but I do not care."

NARCISSISM. It is another thing to say, "I did not know or experience it, so it cannot be true or possible."

From Lessons From The Watermelon Man

There are times, even as the fate of our nation's future hangs in the balance, when I wonder if the die hard "Country First" contingent would rejoice in the crumbling of America if it meant the destruction of President Barack Obama.