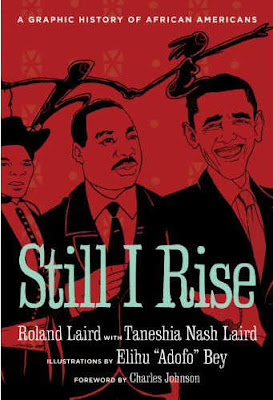 I got a book in the mail the other day to review, called Still I Rise: A Graphic History of African Americans – I guess Brown Man Thinking Hard is coming up in the world. As an illustrated graphic nonfiction book that chronicles the African American experience in America, this book packs a lot more than the traditional treatment of black history between its covers.

"Illustrated graphic", as I found out, is a fancy way to say "cartoons". Even so, what the really unique thing is that immediately hits you about this book - a collaborative effort between Ronald Nash, Taneshia Nash and Elihu Bey - is the way the creators decided to develop the narrative. The cartoon medium demands an economical use of language – one of the things that gives a traditional comic strip its power. With a narrative that covers over three hundred and fifty years of African American history, a book like this requires a fine tuned sensibility in order to pick and choose between all the important milestones that have occurred.

The phrase "revisionist history" has always been a misused term to me - the "history" most of us learned in the 60's, 70's and 80's was an incomplete version of what transpired in the past. Still I Rise: A Graphic History of African Americans , on one level, is an ambitious attempt to more accurately recount African American history by filling in a lot of the details that seem to be absent from most mainstream historical accounts of America's past. The title of the book, borrowed from the famous poem by Maya Angelou, "Still I Rise", alludes to the "twisted lies" sentiment Angelou talks about in her poem's very first few lines:

"You may write me down in history
With your bitter, twisted lies,
You may trod me in the very dirt
But still, like dust, I'll rise."

By introducing two cartoon narrators in the opening panel, the Lairds and Bey essentially produce a "voiceover" effect with these figures, who act as the book’s fictional "hosts" while passing judgment on seminal historical events. The language doesn't try to mimic any particular period, unless the creators use a direct quote – most of the exchanges are in modern English, and often include today's slang terms. Simple and direct, the cartoon panels convey a sense of what happened during important historical events in efficient thumbnail sketches. What I enjoyed the most about the book was the number of new facts I learned.

The Lairds didn't pull any punches – the word "nigger" appears repeatedly in the conversations between white characters in the early sections, along with an illustration by Bey of a white man raping a black woman slave - all of them things that actually happened. The drawings themselves are of uneven quality - some panels are well drawn, with recognizable characteristics of historical figures, while others seemed to be rushed, as if those panels were hurriedly added later in the editorial process.

In some areas of the narrative, the creators often resort to broad, stereotypical strokes in their editorial asides aimed at drive home the theme of the African American struggle. The text itself doesn't seem to be updated very much from the books original publication back in 1997. And by centering the "our" in "our struggle" around the outsider perspective, it may seem, for the many blacks who live, work, and play in multicultural communities, like a provincial view of America.

Ronald Laird, co-creator of the book, does seem to be on to something, though, when he writes:

"Despite the sincere optimism many White people think it means that when we work together to solve some of societies daunting problems we no longer need to speak explicitly about race. Whereas to many Black people it means we can speak more openly about race and how we can use our experiences and narratives to turnaround many of the problems in our communities."

At its heart Still I Rise: A Graphic History of African Americans seems to successfully complete the mission of the creators. By putting a spotlight, in frame by frame vignettes, on the way the African American experience has been defined in this country - by an illogical hodgepodge of traditions, customs and arbitrary boundaries - their depiction aggressively and graphically "de-mythologizes" our past in a way that emphasizes the things we Americans all have in common as human beings, even as we inhabit dissimilar cultures.

You can get Still I Rise: A Graphic History of African Americans here at Amazon.com.