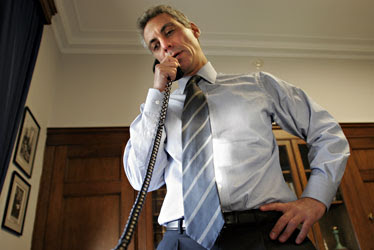 Our nation's 44th president, a man whose pictures from his twenties show a leanness that speaks of more than a passing familiarity with Ramen noodles, has put his foot down. Citicorp, the latest bank to need bailout funds, has requested 40 billion of our money - oops, excuse me, that's 40 billion from our "available credit balance" - to get through the latest slump in the economy.

This is the very same Citigroup that has been widely lambasted by the press over the last few days for planning to upgrade a corporate jet to a new model, ordering one that would cost Citigroup fifty million dollars.

Today, Citigroup no longer has a 50 million jet on order. Or a 40 million one, or 20 million – there will be no new jet at all.

This is finally starting to make some kind of sense.

Will there be anything that the rest of the government’s elected representatives – the Senate and the House of Representatives – take from this kind of leadership? Could it possibly inspire them to quit bitching over whose sneaky backdoor proviso gets to be in a stimulus package and motivate them to put some financial relief squarely in the pockets of those individual citizens who they claim to represent?

If no one else has told President Obama this yet, then I will – there are only two kinds of legacies you will have. You will either be the first African American president, or the president who brought the nation back to its senses. So you might as well govern by relying on your common sense, rather than worry about the pundits or the polls.

All these glowing references to Rahm Emanuel's newly discovered "kinder and gentler" side in the press lately seem to be an attempt to sell us a bill of goods. As a veteran of the financial services industry, I can imagine how graphic and foul-mouthed Mr. "Kinder and Gentler" Emanuel might have acted on the phone with Citigroup once the door was closed, if it was in fact he who delivered the message.

The sad thing about the financial services business is that's the only kind of language they seem to respond to - that ugly, vile, "let me describe how I will violate you" type of exchange that leaves no doubt in the recipients mind that what they are standing in is real, real deep. There are no gentlemen in these thin air businesses - trying to treat them like they are is a waste of time.

Maybe these lily-livered banking execs will finally understand that the gates they live behind aren’t strong enough to keep us out if they continue to act like fiscally irresponsible idiots over and over again.

The good thing is, the "rope a dope" of the campaign trail is over. With no more opponents to tire out, President Obama is coming out swinging.

The great thing is, he is coming out swinging for us - the American people. Now that he's eating more than Ramen noodles, I think he may be able to go the distance.