The Great Uploading of all the pictures that were taken at the inauguration of Barack Obama earlier this week has been going on since Tuesday.

I've been tooling around the blogosphere, checking them out. A couple of photo essays stood out over at Daily Kos - they were a great blend of artfully composed shots and well written commentary. And the monologue by my man at AverageBro.com is hilarious - it sounds like the kind of blow-by-blow recap my buddies give me when they get back from a special trip.

Thanks to the photographers for giving me permission to link to their photos, and thanks to AverageBro, who always appreciates a few more visitors to his blog.


First up is "JJ from VA", who made this trek with his wife to the Mall on Sunday.

"This was one of the most amazing experiences of my lifetime. I've never been surrounded by so many happy, truly happy people of every imaginable race and ethnicity." 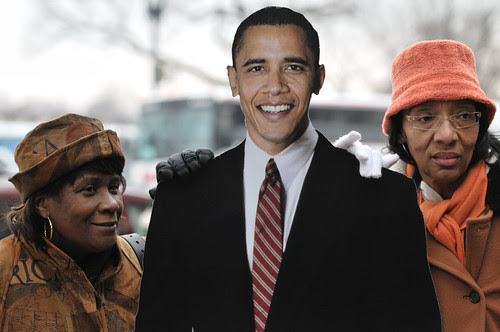 
From my blogroll, which I like to use as my custom built internet newspaper to see what's happening in cyberspace, I read a VERY entertaining account of Inauguration Day from an AverageBro who was just a few hundred feet away from the Ground Zero of the podium.

After awhile, ABL and I got antsy and started walking around the Section 11 (which prolly contained 10,000 seats alone) to see who else was around. In no time we ran into Common (nice guy), Tracee Ellis Ross (looks better on TV), Bill Bellamy, Evander Holyfield (sitting waaaay in the back and apparently not happy about it), Stephen Spielberg (nice guy, who oddly had to also sit in the back), Alicia Keys (far away, I only got a glimpse of her), Bill Cosby (also seen from afar), Wyclef (sitting just in front of us in the Green Zone) and finally.. brace yourselves fellas... Halle Berry.

She was dressed down (hat, big shades, no makeup), but well, it's Halle Berry. Do you ladies realize how many male-male debates/discussions have begun with the words "Well, what if Halle Berry...." over the years? She was too far from the aisle for me to ask for a photo (and she had well-disguised security, something few other celebs had), but this still made my day. 50 years from now, my kids will ask me about Inaug Day, and all I'll say is "Good Lawd, Halle Berry!!!!".


Mal Harden also made the trek to D.C. with his wife. 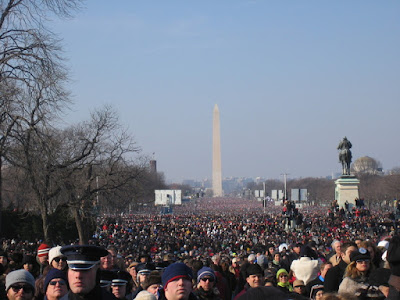