Even Obama Must Be Getting Tingly These Days 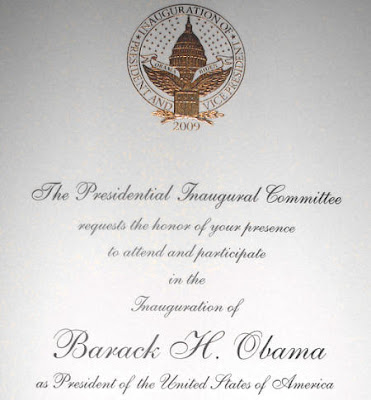 This is getting to be like the week before Christmas, when you start to have presents lying under the tree - watching Barack Obama get off of the presidential plane on Monday, then seeing him yesterday, meeting with all the ex-presidents at the White House, it is starting to feel realer than real that this black man will be the president of the United States of America in less than two weeks.

Even Obama, "Mr. Cool" himself, has got to be getting a little tingly right about now.

The Super Bowl is usually the event that gets the big build up in January, but not this year. People are starting to get that far away look in their eyes when you say "January 20th", like they are about to go on a vacation they’ve been saving for all their lives.

I myself am getting restless, like an overfed tiger at the zoo. I'm walking a little taller, like I've just discovered how to stand up straight after all these years of slumping my shoulders. I can't even watch my favorite political pundits on TV lately, since they all seem like they are just killing time arguing over the Obama appointments until the Big Day arrives.

And as I read the jubilant messages from that select group of people across the blogosphere, who are not just going to be in D.C. next weekend, but are going to be there with the actual invitations to the Inauguration Ceremony that they have begun to receive, I start to wonder - am I missing out on a big part of this if I am here at home in Atlanta with my party hat and my noisemakers on the biggest Tuesday of the year? Should I try to talk S. into making this once in a life time trek to the nation's capital to join the millions of other black people who will line the streets around the Mall?

Unless someone from Oprah's staff calls me with some tickets and a room in the mansion she's renting for the week, on January 20th, I'll be in the same VIP section I sat in on Election Night - right here in the basement in the ATL. With a bathroom, bar, and big screen TV - three of the four "B's" that normally satisfy 80% of a man's urges - you would think I should be happy to watch history unfurl itself with my remote control in hand.

If you are fortunate enough to be going to D.C. next weekend, pack plenty of longjohns and enjoy yourself. And email me some pictures.

If you are among the super fortunate, who have received an invitation like the one in the picture above that allows you to attend the actual ceremony – I'm greener than the Incredible Hulk right now, but please - email me some pics anyway.

And if you are going to be in your hometown, or in your basement, or at work, you can email some pictures too.

Now where do they sell those black balloons with the "O" on them?