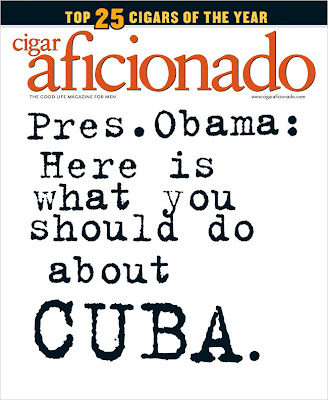 A lot of the longer posts on this site have been mulled over and fleshed out while I smoked a cigar.

In the hour or so it takes to do a nice presidential sized Nicaraguan maduro justice, I believe I get to think more deeply about things. Or, if I combine puffing on a cigar with another activity, like I did yesterday when I took the blower and blew the leaves and pine straw out of the backyard, it seems to foster the kind of free association that allows me to more easily join the mundane and the profound together.

The cigar shop I frequent is an interracial men’s club - black, white, and hispanic - owned by an Iraqi American, where we solve the problems of the world, peruse the latest issues of Playboy, and trade domestic war stories on Saturday afternoons.

So the story in today’s New York Times about the magazine Cigar Aficionado caught my eye. The cover of their latest issue proclaimed "Pres. Obama: Here is what you should do about Cuba." None of this really meant anything to me until I saw this comment that Stephanie Clifford, the Times reporter, had inserted into the article:

It is an oddly liberal position for a rather conservative magazine. When one thinks of Cigar Aficionado, one thinks — fairly or unfairly - of rich, right-wing men puffing away on their Cohibas.

Most of the guys in know who smoke cigars are middle aged, middle income, middle of the road "no-wingers" who think politicians are lower than machine rolled cigars. They do everything but inhabit boardrooms.

Granted, there are a few patrons at the place I frequent who run good sized companies, and have many millions in the bank, but for the most part, those guys don’t show up all that much. I guess they can go to their lake house, or sit on their yacht at the dock, or take their slice of their fractional jet ownership to someplace exotic. For the rank and file cigar smoker, we have no place else to go but the cigar shop.

The only time you hear about Cuba at the cigar shop is when someone complains about being ripped off by a source who claims they have "authentic" Cubans. I have to agree with guys who are cigar experts – there is something different, something more potent, about a Cuban cigar, but it's not great enough for me to go through the trouble or expense of trying to get a regular supply.

There are a few of the guys who have made a pilgrimage to Cuba, who will often tell the well-worn tales of their adventures as they walked streets filled with run down, patched up cars, 1950’s era infrastructure and people who were willing to do almost anything for an American dollar.

Do we debate the idea of communism being at America’s doorstep? Nope. Do we discuss why American government is at an impasse with the Castro brothers? Nope. All we talk about is how much cheaper the Cuban cigars will be if we lift the embargo...

...for maybe five minutes, until the next game comes on.

America has proven, both here and abroad, that it can be a world class oppressor when it wants to be. But that strategy doesn’t really work – it takes a lot of resources to counter the hatred you foster in people once you put your foot on their neck.

The Cuban people are hungry. The little bit of infrastructure they have left is on its last legs. And Castro, an old guy so weak he has to be propped up by his nurses when he wants to play General, seems to be more of an enemy in the minds of our behind the times political pundits than he is in real life.

President Obama has some bright minds in his administration. They're a little busy getting up to speed right now, but once they get settled in, unleashing them on this problem wouldn't be a bad idea. Changing the Cuba narrative would be a good place for them to start, by replacing the romantic view of Cuba with the modern images of poverty and decay that actually exist.

Putting the "Cuba holds political prisoners" argument that conservatives and moderates alike have long supported to rest, especially when we are willing to do business with Communist China amid all its civil rights abuses, and call Israel an ally when it holds thousands of Palestinian political prisoners, would be a good second step.

Fearing Cuba right now is nonsensical - with some sort of change eminent in the near future, being the best solution to their immediate problems will do America more good than harm in the long run.