When You've Got The Name And The Looks 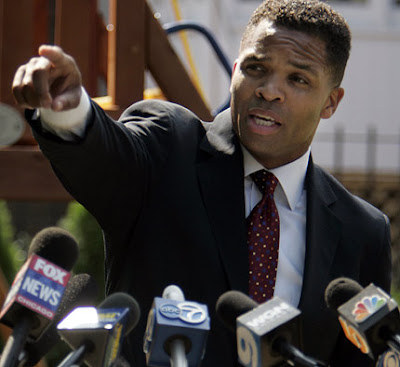 Jessie Jackson Jr. got both.

I myself got two colorful monikers, one Arabic, one Hindu, preceding my English surname, two names as far away from my father's utilitarian "Fred" as you could get. I quickly boiled them down to "Kris" the way "Barack" boiled his name down to "Barry" for the exact same reason he did - to avoid being different from everybody else.

When I was younger, I used to ask my father "why I wasn’t a 'Junior'?"

"Because I didn’t want you to be burdened with it if I didn’t keep my name clear."

The things that men like Jesse Jackson Sr. and my father and other highly motivated black men across the South went through to get to college, then to go out into an America that was in such racial turmoil in the sixties and be somebody was a part of a crossroads in time.

My father went to work for the government.

So when your father runs for the presidency of the United States of America, even if it is a symbolic campaign, you don’t have a burden to be carried, you have a bar to be raised.

Since I didn’t know much about the younger Jackson, I decided to see for myself just who was the man behind those flashing eyes and that hungry smile. It quickly turned into a bona fide internet research junket when I clicked on a link to his wife, Sandi.

The most striking thing about Jesse Jackson Jr. that jumped out at me after reading through several biographical accounts of his life is the sense that this is a young man in a hurry. “Hyperactive” is what they called him at the military school he attended when he and his brother Jonathan proved too much for their mother and their Chicago school to handle.

In Jesse Jackson Jr.'s short career, he has chomped at the bit to run for mayor of Chicago as well as the U.S. Senate. He bypassed local politics altogether at the beginning of his career, against the advice of his father, jumping right into his first congressional race when Congressman Mel Reynolds was caught soliciting a minor.

He is still hyperactive.

He only misses TWO floor votes in thirteen years in Congress, a feat in and of itself.

He does his homework on the issues before he starts talking.

He sponsors constitutional amendments instead of special interest bills.

He knows the rules and the protocol of Congress inside and out.

He opposes President Bush ideologically but maintains a personal relationship with him.

He has co-written several books, and authored one about why he is who he is.

But - he’s never had a job outside the family business, never been ordained, never taken the bar.

Jackson Jr. HAD to at least talk to Rudy Blagojevich. So did Obama's people. ANYONE who wanted a real shot at getting the Illinois Senate seat vacated by Barack Obama would have. Valerie Jarrett only escaped her own in person meeting or phone sessions because she probably wasn't a real candidate anyway.

But Jackson Jr.'s hyperactivity may have worked against him this time.

When he described Barack Obama at the Democratic Convention this summer, he said “he doesn't always tell people what they want to hear. He tells them what they need to hear."

So Jesse Jackson Jr., I'm not going to tell you what you want to hear, but what you need to hear.

Slow all this apologizing down for something you say you didn’t do. WAY down.

DO NOT concede your bid for the Senate right now – all the facts are not in yet.

Figure out how to tone down that prickly, thin-skinned edge you exude a couple of notches.

Estimate how much of the truth you think we can handle - and tell it before the other guy does.

You’ve got your father’s name. You’ve got more than a passing physical resemblance to him. Now, what we need to see is some of that famous Jesse Jackson Sr. charisma, some of that magnetic, plainspoken charm that used to allow us to see your father for more than he was.

Because in the end, that’s what a real leader is – someone who projects their greatness into our lives in a way that helps us believe a little more in ourselves, and trust a little more in you.