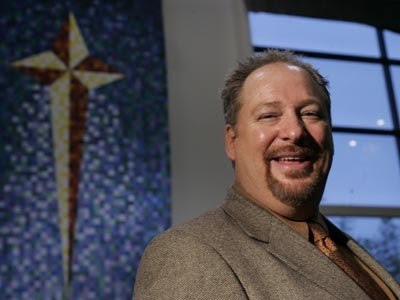 Barack Obama’s choice of Rev. Rick Warren to say a five minute prayer before Obama is sworn in as the next president of the United States doesn’t send me a message, Morse code, or smoke signals.

Picking Rick Warren to give the inaugural convocation didn’t “send me a message” because I really don’t know who Rick Warren is.

I know his name, because he has been mentioned on the news a lot. Off the top of my head, I can state with certainty that he is an overly jolly looking white guy, he preaches and probably collects lots of money at a church called Saddleback, and he interviewed Barack Obama and John McCain about religion, interviews that I did not watch, either live or on Youtube.

When I ran this by S., she said “he’s the guy who wrote that book The Purpose Driven Life – the one that was a best seller.”

My eyes shifted upward for a second.

These guys are most of America, the kind of people who are not overly concerned with anything unless it affects them directly. They let the common sense they’ve developed over the years, like most Americans do, dictate what is an important issue to them.

Our friends who make up the media, by contrast, are in the advertising selling business, so the easiest way to get your attention is to throw common sense out of the window and push an innocuous idea like Rev. Warren giving a prayer to the most extreme conclusion possible.

I can guarantee you right now that Rev Warren’s prayer will not be the most important thing that happens the week of January 20th. It won’t even make the it into the list of Top Ten news items. What has happened, though, since Obama has put this outspoken opponent of gay rights on the national hot seat, is a moderation by Warren of his stated positions on the gay and lesbian lifestyle.

Gay and lesbian rights are not an issue that keeps me up at night, but for those to whom they do matter, I would hope they could get beyond their emotional reactions long enough to see how putting the spotlight on Warren will push him closer to the center philosophically than the next ten protest marches. We cannot continue to stay in our own corners, whether we're black or gay or devoutly religious or anti-war, duking it out with all who oppose us, if we hope to achieve any different results than we've already gotten.

But back to this idea that the populace is able to rely on their common sense to guide them past make-believe issues that are just time wasters. I would speculate that Barack Obama has the same kind of common sense my buddies have. He knows, like they do, the difference between the thing people see on the outside and what is really on the inside of an action he takes, especially something like this invocation, which can't take more than five minutes tops.

I'm sure the selection of black civil rights icon Rev. Joesph Lowery to give the benediction at the inauguration is going to offend somebody too.

Right now, it's those future breadlines, not these Rick Warren headlines, that we need Obama to be worrying about.